We're not the only ones who saw it... 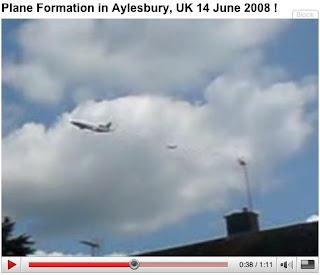 August 23rd, 2004 in Chandler, Arizona. We were watching TV at 2:30 in the afternoon when a weather alert bulletin came on, advising that a very large and violent thunderstorm was approaching our area from the north. Thinking to watch it we went outside onto the small patio, where indeed an ominous looking mass of dark gray and black clouds was coming in our direction. Where we lived in Chandler was due south of Sky Harbor Airport in Phoenix. We'd seen planes follow landing and takeoff patterns many times, and as usual on this day a number of them could be seen. Hoping for a better view of the storm, we went around to the front of the building and faced north. Silhouetted against the dark cloud mass appeared a large passenger plane, moving from right to left at about a 30 degree angle upwards from the ground.
We both simultaneously noticed a flash of movement from the right. A metallic object was rapidly catching up to the plane, at twice its relative speed. We watched in amazement as the object caught up to the plane, then hovered effortlessly within 100 feet of it's tail, matching it's speed and direction perfectly. Relative to the size of the plane the object must have been approximately 30 feet in diameter. There were no signs of engines or any form of propulsion.
After tailing the plane for about 10 seconds it suddenly veered sideways and disappeared from our sight behind the fuselage of the plane, and we never saw it again. What was it? Not a clue. Obviously under intelligent control. A metallic surface like silver or platinum. No visible means of propulsion, but easily twice as fast as a commercial jetliner. Lots of strange things in the sky. This was simply what we saw, nothing more, nothing less. Any ideas?

Here’s the video of the same kind of event, in England:
http://www.youtube.com/watch?v=xA8iUrPkZpE

(Note: the "plane formation" mentioned in the title comes at a later part of the video. This was NO plane.)
Posted by CoyotePrime at 7:30 PM