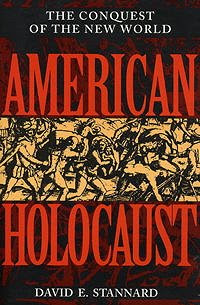 "Before early Europeans arrived, the Americas (North and South by expert estimates) were home to over 100 million indigenous peoples. From 1492 to 1892, US Census Bureau figures showed less than 250,000 survived. Or put another way - white Europeans committed the greatest ever genocide that was rivaled only, but not equaled, by the one against black Africans who were stolen into slavery for the "new world." Millions of them died during capture and the Middle Passage.

Our Native peoples in even greater numbers - victimized by ritual slaughter. By being hacked apart, buried alive, trampled under horses, hunted as game and fed to dogs, shot, beaten, stabbed, and even scalped for bounty or as trophies. They were also hung on meathooks like beef, thrown into the sea from ships (the way blacks were), worked to death as slaves, starved, frozen to death during forced marches and internments, and infected with deadly diseases. Our disturbing "civilization" that's untaught in American schools, and when it is Indians are the villains and the settlers their victims. History on its head the way Hollywood portrays it and still does.

Ward Churchill recounts otherwise about what he calls "the American holocaust" and compares it to the Jewish one under the Nazis. He explains that, "Distinctions...between right, center, left and extreme left in the US are quite literally nonexistent on the question of genocide of indigenous peoples. From all four vantage points, the historical reality is simultaneously denied, justified, and in most cases celebrated (or just forgotten). But preposterous as these arguments are, all of them are outstripped by a substantial component of zionism which contends not only that the American holocaust never happened, but that no 'true' genocide has ever occurred, other than the Holocaust suffered by the Jews" in Nazi Germany.

It's an all too familiar pattern of historical revisionism or denial to view one people's ordeal as important, preeminent or unique and another's as non-existent - depending, of course, on who suffered and who caused it. After WW II, Zionist Jews copyrighted Hitler's genocide, rebranded it "The Holocaust," framed it as a one- off event, and created the myth of unique Jewish suffering.”
-Stephen Lendman, http://www.heyokamagazine.com/heyoka_magazine.20.stephenlendman.htm
Posted by CoyotePrime at 4:30 PM