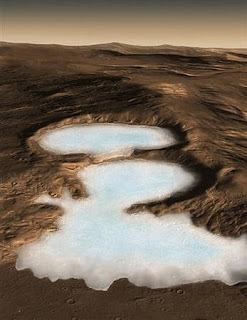 WASHINGTON (Reuters) "A radar instrument aboard a NASA spacecraft has detected large glaciers hidden under rocky debris that may be the vestiges of ice sheets that blanketed parts of Mars in a past ice age, scientists said on Thursday. The glaciers, the biggest known deposits of water on Mars outside of its poles, could prove useful for future manned missions to the red planet as drinking water or rocket fuel, University of Texas planetary geologist John Holt said. "If we were to, down the road, establish a base there, you'd want to park near a big source of water because you can do anything with it," Holt said.

The glaciers, perhaps 200 million years old, also may entomb genetic fragments of past microbial life on Mars as well as air bubbles that might reveal the composition of the atmosphere as it was long ago, according to geologist James Head of Brown University in Providence, Rhode Island. A ground-penetrating radar instrument aboard the U.S. space agency's Mars Reconnaissance Orbiter collected the data that confirmed the presence of the buried glaciers that extend for dozens of miles (km) from the edges of mountains or cliffs. These closely resemble glaciers in Antarctica that similarly are covered by rocky debris, Head said.

Scientists previously determined that large deposits of ice exist at the Martian north and south polar regions, but hundreds of these buried glaciers are located at mid-latitudes on the planet. Head said they can be about half a mile thick. One of them was three times larger than the city of Los Angeles. The ones described by the researchers in the journal Science were in the Hellas Basin region of the Martian southern hemisphere, but many more are in the northern hemisphere. Holt said the glaciers may be the vestiges of large ice sheets that once covered parts of Mars in a past ice age. Earth's most recent ice age ended about 12,000 years ago.

"It's dramatic evidence of major climate change on Mars, presumably linked to orbital variations. That's what causes the major glaciations on Earth," Holt said. The existence of these features - rounded surfaces sloping gently away from steeper ridges - has been known for decades but their nature was a matter of dispute. Some scientists had argued they were ice-filled rock piles and not glaciers. But the radar echoes received by the spacecraft indicated that a thin coating of rocky material at the surface covered thick ice and not rock.

Scientists want to understand the history of water on Mars because water is fundamental to the question of whether the planet has ever harbored microbial or some other life. Liquid water is a necessity for life as we know it. While Mars is now arid and dusty, there is evidence it once was much wetter. For example, scientists think that long, undulating features seen on the northern plains of Mars may be remnants of shorelines of an ocean that covered a third of the planet's surface at least 2 billion years ago.”
- Will Dunham, http://www.reuters.com/article/scienceNews/idUSTRE4AJ93P20081121
Posted by CoyotePrime at 1:57 PM