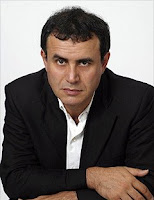 “The U.S. economy is confronting a toxic mixture: deflation, a liquidity trap and debt deflation, as well as rising household and corporate defaults. Put plainly, the signs of a "stag-deflation" - a deadly combination of stagnation/recession and deflation - are now clear.
We are in a severe recession, and now the recent readings of both the Producer Price Index and the Consumer Price Index show the beginning of deflation. The slack in goods markets - with demand falling and supply being excessive (because of years of excessive over-investment in new capacity in China, Asia and emerging market economies) - means firms have lower pricing power and a need to cut prices to sell the burgeoning inventory of unsold goods. The slack in labor markets means lower wage pressures and lower labor-cost pressures; and the slack in commodity markets - that have already fallen by 30% from their summer peaks and will fall another 20%-30% in a global recession - means lower inflation and actual deflationary forces.

When deflation sets in, central banks need to worry about it - and worry about a liquidity trap. Take the example of the 2001 recession: That was a mild eight-month recession in the U.S. and was over by the end of 2001. But by 2002, the U.S. inflation rate had fallen toward 1%. The Fed was forced to cut the Fed Funds rate to 1% and Ben Bernanke (then a Fed Governor) was writing speeches titled "Deflation: Making Sure "It" Does Not Happen Here." So if a mild recession that was not even global led to deflation worries, how severe could deflation be in a recession that even the IMF is now forecasting to be global in 2009?
When economies get close to deflation, central banks aggressively cut policy rates, but they are threatened by the liquidity trap that being zero-bound on nominal policy rates implies. The Fed is now effectively already in a liquidity trap: The target Fed Funds rate is still 1% but expected to be cut to 0.5% in December and down to 0% by early 2009. Also, while the target rate is still 1%, the effective Fed Funds rate has been trading close to 0.3% for several weeks now as the Fed has flooded money markets with massive liquidity injections. So we are effectively already close to the 0% constraint for the nominal policy rate.

Why should we worry about a liquidity trap? When policy rates are close to zero, money and interest-bearing short-term government bonds become effectively perfectly substitutable. (What is a zero-interest-rate bond? It is effectively like cash.) Monetary policy becomes ineffective in stimulating consumption, housing investment and capital expenditure by the corporate sector. You get stuck into a liquidity trap and more unorthodox monetary policy actions need to be undertaken.

First, if aggregate demand falls sharply below aggregate supply, price deflation sets in. There is already massive price deflation in the U.S. in the sectors - housing, autos/motor vehicles and consumer durables - where the inventory of unsold goods is huge. The fall in prices and the excess inventory forces firms to cut back production and employment; the ensuing fall in incomes leads to further fall in demand - and induces another vicious cycle of falling prices and falling production/employment/income and demand.

Second, when there is deflation, there is no incentive to consume/spend today as prices will be lower tomorrow. Buying goods today is like catching a falling knife and there is an incentive to postpone spending until the future: Why buy a home or a car today if its price will fall another 15% and purchasing today would imply having one's equity in a home or a car wiped out in a matter of months? Better to postpone spending. But this postponing of spending exacerbates the vicious cycle of falling demand and supply/employment/income and prices.

Third, when there is deflation, real interest rates are high and rising in spite of the fact that nominal policy rates are zero. If the policy rate is zero and there is a 2% deflation, the real short-term policy rate is actually a positive 2% that further depresses consumption and investment; and real long-term market rates are even higher with deflation, as market rates at which firms and households borrow are much higher than short-term policy rates."
- Nouriel Roubini, Full interview here: http://www.alternet.org/workplace/108958/
radical_solutions_for_a_crazy_economy/
Posted by CoyotePrime at 3:29 PM