What is the "Hegelian Dialectic?" 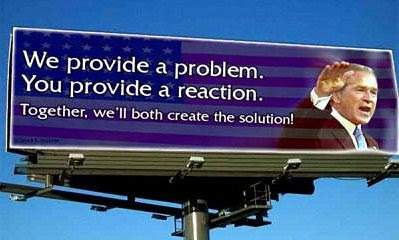 "The individual is handicapped by coming face-to-face with
a conspiracy so monstrous he cannot believe it exists."
- J. Edgar Hoover
“Why is it important for you to understand the subject of the Hegelian Dialectic? Because it is the process by which all change is being accomplished in society today. More importantly, it is the tool that the globalists are utilizing to manipulate the minds of the average American to accept that change, where ordinarily they would refuse it.

The Hegelian Dialectic is, in short, the critical process by which the ruling elite create a problem, anticipating in advance the reaction that the population will have to the given crisis, and thus conditioning the people that a change is needed. When the population is properly conditioned, the desired agenda of the ruling elite is presented as the solution. The solution isn't intended to solve the problem, but rather to serve as the basis for a new problem or exacerbate the existing one. When the newly inflamed difficulty reaches the boiling point of a crisis, it becomes the foundation upon which arguments may again be made for change. Hence, the process is repeated, over and over, moving society toward whatever end the planners have in mind.

It's also important to understand that as this process is being driven, arguments are created both for and against certain measures of change. All arguments are controlled. The presented solutions- each with varying levels of unadornment- are "debated" publicly by the manipulators or their minions. This is done until a perceived compromise has been reached on the best measure to take in route to solving the crisis. Then, the outcome of the "debate" - which purportedly weighs the concerns of the public with the mandate to do something - is enacted as public policy. Such is a summary of the Hegelian Dialectic. Though few in American society have ever heard of it, still fewer have not been profoundly impacted by its use in the effective neutralization of opposition in the formation of public policy.” - http://www.amerikanexpose.com/hegel/

“The world's economy and politics are largely controlled by a small number of global banking families, some of whom have been at the game for over 200 years. They have simply massive levels of money and resources of all types at their disposal. They control the central banks of America (the Federal Reserve, which is privately owned ~ no more a part of the constitutional Federal government than Federal Express [Fed Ex] is, the European Union, etc.

These families follow a formula when they want to institute changes for their own benefit: thesis, antithesis, synthesis. (David Icke calls this: problem, reaction, solution.) For example, they organized the First World War, and it resulted in mass murder and economic crisis as it went on for years. In the Russian Empire the "thesis" was WWI, the "antithesis" was the effect on the population and the political "blow back" from the war. The "synthesis" was the rise of communism, which they financed and controlled, and the total police state control of the former Russian Empire that it gave them. Prior to WWI the Russian Tsar would not allow the Rothschilds and other global bankers to control his economy. The "synthesis" was one of the true goals of the "thesis" (WWI) and the "antithesis" (the population's response to the horrors of war).

The Great Depression was the antithesis to the excesses (thesis) of the 1920s and the result (synthesis) was a greatly expanded Federal government with massive programs (aimed at ending the Great Depression) that required vast amounts of funding from their privately owned Federal Reserve Bank and its ability to create money out of thin air and loan this back to the government and collect interest on it (instead of the government just creating the money itself without any interest being due to private bankers). Side benefits to the global banking families was a great shake out of wealthy Americans and their ability to capture a much larger amount of corporate ownership/control than had existed before (using cutouts, front men, and corporate control mechanisms established by them).

The game of thesis, antithesis, synthesis is played on many levels and many such "games" are often ongoing at the same time (think of it as multiple interrelated games of space chess). The unchecked banking greed and the lack of proper legal controls and governmental oversight (thesis) has led to the current nightmare events of major banks and insurance companies failing or being bought out or funded by governments (antithesis). The synthesis is that, just in the United States alone, three trillion dollars of new public debt has been created in the last week or so to "solve" the problems. New debt that enriches the private owners of the Federal Reserve System. Three trillion dollars of debt, on top of the already massive US national debt, that the American public has to pay interest on for many, many, years. Of course, the "debt solution" is itself a antithesis in a broader game with the synthesis being the New World Order (or a major step towards it).

Its all a great evil scam and we, the public, are too stupid, too scared, too blind, too wrapped up in television/etc. to be educated as to what is really going on. And most importantly, we are simply too lacking in good morality to have the strength, the moral strength, to fight it.

All of this has been planned. Do not let yourselves play the village fool saying "why did they let this get so out of hand," or "you would think that they could come up with something," or- best of all- “that could never happen here!” The global banking families, whose hands control the levers of political and economic power in most nations of the world (and certainly America, the United Kingdom, France, etc.), are very intelligent and are playing a very sophisticated game - actually the eco-political grand strategic control of the world is the most sophisticated of all games. As FDR use to say, "if something happens in politics you can bet that someone planned it to happen".

They are moving the world to a New World Order in which they will have absolute and total control of all wealth and all levers of political and military power. To a world that utilizes 21st Century technology to enslave the population. All based on lies and the greed of a very small number of very powerful people leading the masses into the worst nightmare of human history. The fact that so many of the secret ruling elite are satanists should not be surprising. Ultimately, where their current End Game in the drive for a New World Order is taking us is a place of total global destruction. Sadly, there is no force, political or otherwise, that seems capable of reversing the trend to global economic disaster and global war.” - Stirling, http://rense.com/general83/vortex.htm
Posted by CoyotePrime at 9:49 AM