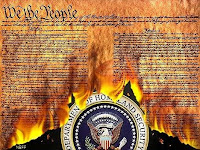 "In a world where the president has the power to label anyone, whether a citizen or permanent resident, an enemy combatant and detain that person indefinitely without trial, no liberty exists and everyone is potentially an "enemy combatant." According to the Bush Administration, Ali Saleh Kahlah al-Marri is such a person.

This legal alien was residing in Peoria, Ill., with his wife and children and attending college when he was swept up by government agents. Although three charges were initially filed against al-Marri by the government—credit card fraud, false statements to the FBI and on a bank application and identity theft—they were dropped less than a month before trial. In their place, a declaration was issued by George W. Bush asserting that al-Marri was an enemy combatant. Thereafter, al-Marri was transferred between facilities, eventually ending up, in 2003, in a South Carolina military prison, where he has been held since. Amazingly, for the first 16 months of his imprisonment, this man's family was not allowed to see him, speak to him or even reassure themselves that he was alive and well.
Al-Marri has been repeatedly interrogated in ways that border on, and sometimes amount to, torture—including sleep deprivation, painful stress positions, extreme sensory deprivation and threats of violence or death. And because al-Marri was labeled an enemy combatant, the government has denied him basic constitutional protections, such as the right to hear the charges against him, consult an attorney and appear before a judge to determine if, in fact, he is guilty of anything.
To some people, this is as it should be. But that's not the way things are supposed to work in America. Even the worst criminals in American history, such as domestic terrorist bomber Timothy McVeigh, were afforded an attorney and a trial. This issue is bigger than al-Marri. It's even bigger than the American government and its so-called war on terror. The groundwork has been laid for a new kind of government where it will no longer matter if you're innocent or guilty, whether you're a threat to the nation or even if you're a citizen. What matters is what the president thinks. And if he or she thinks you're a threat to the nation and should be locked up, then you'll be locked up with no access to the protections the U.S. Constitution provides. In effect, you will disappear.
Pandora's Box has been opened for presidents to become imperial rulers, which should terrify anyone with a sense of history. Sadly, few Americans are up in arms over the ramifications, let alone concerned that this might impact them in any way. "I'm a law-abiding citizen," one man remarked. "I have nothing to worry about." That statement might have been true once upon a time, when a person was innocent until proven guilty and the judicial system could be relied upon to hear facts and ascertain truth. But such is no longer the case. We are now operating under a system of government where anything goes and everyone is suspect.
Fortunately, the U.S. Supreme Court will now decide al-Marri's fate. The Court will determine some of the most fundamental questions in the war on terror: Can the president by fiat order the indefinite military detention of lawful residents of the U.S.? Does the president have the right to set aside all the constitutional protections afforded those living on American soil? In other words, can the president declare the U.S. Constitution null and void whenever he or she sees fit?

We would all do well to remember that in America, the rule of law has always taken precedence over the power of government bureaucrats. What does this mean? At a minimum, the accused has the right to present his side to a judge and jury. The Constitution protects "persons," not just citizens. Indeed, the Fifth Amendment guarantees that "no person" will be "deprived of life, liberty, or property, without due process of law." The Sixth Amendment secures our right to a speedy and public trial by an impartial jury, to be informed of the charges brought against us and access to a lawyer. Together, these portions of the Bill of Rights ensure that the government cannot take our freedoms away unless they charge us with a crime, place us before a judge and jury and give us a fair opportunity to confront the witnesses and evidence presented against us.
We must remember that America's reputation as a defender of the rule of law is worth preserving. At one time, the Statue of Liberty symbolized America's commitment to fairness, liberty and a decent respect for the rights of all human beings. Today, the military commissions and secret military detention camps represent America's hypocrisy and a disregard for everything the country stands for.

The Bill of Rights ensures that no public official can by fiat declare us outside the boundaries of the Constitution. We must always be leery of government reactions to emergencies and crises because the government's natural response is to rein in liberty for safety. But, as Benjamin Franklin once insisted, "Those who would give up essential Liberty, to purchase a little temporary Safety, deserve neither Liberty nor Safety." Finally, it is easy to talk about freedom and democracy. But that's nothing more than idle rhetoric until the ideals and values they represent are put into practice.”
- John W. Whitehead, http://www.rutherford.org
Posted by CoyotePrime at 7:06 PM