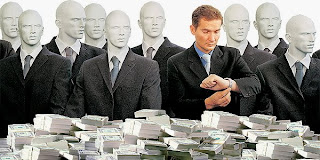 “One might think the financial executives who brought the world to the brink of financial ruin should be finding coal in their stockings this Christmas. But don't be concerned about them. The Associated Press reports that last year, $1.6bn in bonus payouts went into the pockets of top executives of more than a hundred banks and companies that later received bail-out funds from the US government. Do they deserve such lavish compensation after savaging their balance sheets and precipitating a worldwide financial crisis? Aren't these the guys who go us into this mess in the first place? Are banks rewarding executives for bringing their companies and the world's financial system to the brink of ruin? Or were these big bonuses legitimately earned?
One of the arguments for paying the executives such large sums is that they already earned them, even if things had gone sour afterwards. But this was no natural disaster. The financial crisis was rooted in the way these executives managed their businesses, and this reckless behaviour was egged on by pay packages that rewarded profits and ignored the dangers to balance sheets of growing leverage and exotic derivatives. The returns they generated led them to assume ever greater levels of leverage, while turning a blind eye to the risks they took on. They were encouraged by Alan Greenspan and others who believed that collateralised debt obligations and credit default swaps were spreading and reducing risk, instead of spreading it like a contagion. As we have now learned, the returns these financial wizards generated were built on quicksand. Even the great Greenspan himself has admitted that the self-interest alone could not protect our financial system from the consequences of excessive debt. This means that the pay these wizards claimed was based on faulty compensation models, as well as faulty business models. If their pay packages were so fundamentally flawed as to encourage reckless behaviour, then why should they be honoured?

The theory behind the colossal growth in executive compensation was to tie pay to performance; more precisely to align executive interests to those of shareholders. But the compensation plans rewarded reckless behaviour by encouraging leverage through the use of exotic financial engineering products that obscured risk and turned sub-prime loans into triple-A rated securities. This may work when everything is going well, but even the frothiest markets have shown themselves to be subject to the laws of gravity. The profits that justified their big bonuses were evanescent at best and delusional at worst.

Members of Congress are appalled by the prospect of taxpayer funds going to companies lavishing such undeserved largess on such a group of demonstrated failures. But the difficulty is that the government has little control over the money once it's handed out to the banks. The bail-out money is fungible, meaning that it can't be differentiated from all of the other funds in the banks' accounts. The first job of the treasury department was to shovel money in the banks' direction to shore up their balance sheets and get them lending again. By definition, the liquid assets in their accounts are undifferentiated; one dollar is just like another. As far as the accountants are concerned, the government's money may as well have been unmarked bills.

But if taxpayer funds can't be specifically identified, the US government can impose conditions on the way the banks do business, just as any shareholder or creditor might when coming to the rescues of a distressed company. When Warren Buffett came to the rescue of Salomon Brothers in 1991, he announced that he was cutting year-end bonuses, prompting a revolt on the trading floor. When the Federal Reserve orchestrated the industry bail-out of long-term capital management (founded by executives fired by Salomon) in 1998, its principals were forced to work for a fixed salary, having lost their fortunes and relinquished control of their once-mighty hedge fund.

Treasury secretary Henry Paulson has failed to exert control over executive pay. He just wanted to get the money out the door. Congress and the treasury department are only now establishing oversight. There is a larger objective that may be lost in the scramble to restore liquidity to the banks: restoring trust in the capitalist system itself. Doing so requires that those who got us into this mess not be rewarded for their failure.”
- Thomas Noyes, http://www.guardian.co.uk/commentisfree/cifamerica/
2008/dec/24/wall-street-crisis-bonuses
Posted by CoyotePrime at 3:25 PM