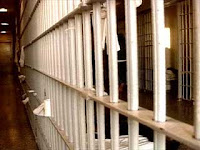 DETROIT - “It's a sign of tough times in the Detroit area where outreach experts say recently freed inmates are making a conscious decisions to get thrown back in jail. The experts say that for some, the relative security of a warm building and three meals a day beats being homeless and hungry in the community.
Detroit has, by many measures, replaced New Orleans as America's most beleaguered city. The jobless rate has climbed past 21 percent, tens of thousands of homes and stores are abandoned and the ex-mayor is in jail for a text-messaging sex scandal. Even the pro football team is in tatters -- the Lions are within two losses of an unprecedented 0-16 season. Underlying it all is the near-collapse of the U.S. auto industry, Detroit's vital source of jobs and status for more than a century.”
-http://www.clickondetroit.com/money/18329089/detail.html#
Posted by CoyotePrime at 3:05 PM