"Time Travel In The Brain" 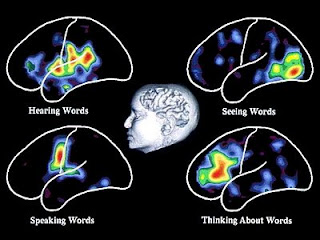 “What are you doing when you aren’t doing anything at all? If you said “nothing,” then you have just passed a test in logic and flunked a test in neuroscience. When people perform mental tasks—adding numbers, comparing shapes, identifying faces—different areas of their brains become active, and brain scans show these active areas as brightly colored squares on an otherwise dull gray background. But researchers have recently discovered that when these areas of our brains light up, other areas go dark. This dark network (which comprises regions in the frontal, parietal and medial temporal lobes) is off when we seem to be on, and on when we seem to be off. If you climbed into an MRI machine and lay there quietly, waiting for instructions from a technician, the dark network would be as active as a beehive. But the moment your instructions arrived and your task began, the bees would freeze and the network would fall silent. When we appear to be doing nothing, we are clearly doing something. But what?
The answer, it seems, is time travel.

The human body moves forward in time at the rate of one second per second whether we like it or not. But the human mind can move through time in any direction and at any speed it chooses. Our ability to close our eyes and imagine the pleasures of Super Bowl Sunday or remember the excesses of New Year’s Eve is a fairly recent evolutionary development, and our talent for doing this is unparalleled in the animal kingdom. We are a race of time travelers, unfettered by chronology and capable of visiting the future or revisiting the past whenever we wish. If our neural time machines are damaged by illness, age or accident, we may become trapped in the present. Alzheimer’s disease, for instance, specifically attacks the dark network, stranding many of its victims in an endless now, unable to remember their yesterdays or envision their tomorrows.

Why did evolution design our brains to go wandering in time? Perhaps it’s because an experience is a terrible thing to waste. Moving around in the world exposes organisms to danger, so as a rule they should have as few experiences as possible and learn as much from each as they can. Although some of life’s lessons are learned in the moment (“Don’t touch a hot stove”), others become apparent only after the fact (“Now I see why she was upset. I should have said something about her new dress”). Time travel allows us to pay for an experience once and then have it again and again at no additional charge, learning new lessons with each repetition. When we are busy having experiences—herding children, signing checks, battling traffic—the dark network is silent, but as soon as those experiences are over, the network is awakened, and we begin moving across the landscape of our history to see what we can learn—for free.

Animals learn by trial and error, and the smarter they are, the fewer trials they need. Traveling backward buys us many trials for the price of one, but traveling forward allows us to dispense with trials entirely. Just as pilots practice flying in flight simulators, the rest of us practice living in life simulators, and our ability to simulate future courses of action and preview their consequences enables us to learn from mistakes without making them. We don’t need to bake a liver cupcake to find out that it is a stunningly bad idea; simply imagining it is punishment enough. The same is true for insulting the boss and misplacing the children. We may not heed the warnings that prospection provides, but at least we aren’t surprised when we wake up with a hangover or when our waists and our inseams swap sizes. The dark network allows us to visit the future, but not just any future. When we contemplate futures that don’t include us—Will the NASDAQ be up next week? Will Dallas win the Super Bowl?—the dark network is quiet. Only when we move ourselves through time does it come alive.

Perhaps the most startling fact about the dark network isn’t what it does but how often it does it. Neuroscientists refer to it as the brain’s default mode, which is to say that we spend more of our time away from the present than in it. People typically overestimate how often they are in the moment because they rarely take notice when they take leave. It is only when the environment demands our attention—a dog barks, a child cries, a telephone rings—that our mental time machines switch themselves off and deposit us with a bump in the here and now. We stay just long enough to take a message and then we slip off again to the land of Elsewhen, our dark networks awash in light.”

- Daniel Gilbert & Randy Buckner,
http://www.randomhouse.com/kvpa/gilbert/blog/200701the_dark_network.html
Posted by CoyotePrime at 8:52 AM