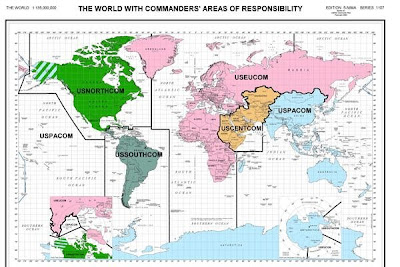 "Here it is, as simply as I can put it: In the course of any year, there must be relatively few countries on this planet on which U.S. soldiers do not set foot, whether with guns blazing, humanitarian aid in hand, or just for a friendly visit. In startling numbers of countries, our soldiers not only arrive, but stay interminably, if not indefinitely. Sometimes they live on military bases built to the tune of billions of dollars that amount to sizeable American towns (with accompanying amenities), sometimes on stripped down forward operating bases that may not even have showers. When those troops don't stay, often American equipment does -- carefully stored for further use at tiny "cooperative security locations," known informally as "lily pads" (from which U.S. troops, like so many frogs, could assumedly leap quickly into a region in crisis).
At the height of the Roman Empire, the Romans had an estimated 37 major military bases scattered around their dominions. At the height of the British Empire, the British had 36 of them planetwide. Depending on just who you listen to and how you count, we have hundreds of bases. According to Pentagon records, in fact, there are 761 active military "sites" abroad. The fact is: We garrison the planet north to south, east to west, and even on the seven seas, thanks to our various fleets and our massive aircraft carriers which, with 5,000-6,000 personnel aboard- that is, the population of an American town- are functionally floating bases.
And here's the other half of that simple truth: We don't care to know about it. We, the American people, aided and abetted by our politicians, the Pentagon, and the mainstream media, are knee-deep in base denial. Now, that's the gist of it. If, like most Americans, that's more than you care to know, stop here."
- http://www.alternet.org/audits/97913/the_us_has_761_military_
bases_across_the_planet%2C_and_we_simply_never_talk_about_it/
Posted by CoyotePrime at 8:52 AM