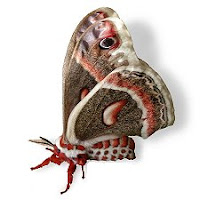 "For example, there is a species of butterfly, a night-moth, in which the females are much less common than the males. The moths breed exactly like all animals, the male fertilizes the female and the female lays the eggs. Now, if you take a female night moth- many naturalists have tried this experiment- the male moths will visit this female at night and they will come from hours away. From hours away! Just think! From a distance of several miles all these males sense the only female in the region. One looks for an explanation for this phenomenon but it is not easy. You must assume that they have a sense of smell of some sort like a hunting dog that can pick up and follow a seemingly imperceptible scent. Do you see? Nature abounds with such inexplicable things. But my argument is: if the female moths were as abundant as the males, the latter would not have such a highly developed sense of smell. They've acquired it only because they had to train themselves to have it. If a person were to concentrate all his will power on a certain end, then he would achieve it. That's all. And that also answers your question. Examine a person closely enough and you know more about him than he does himself."
- Hermann Hesse, “Demian”, 1919
Posted by CoyotePrime at 1:10 PM