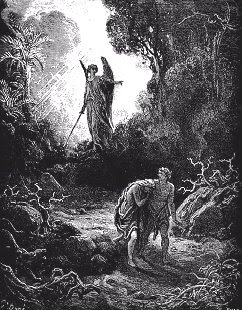 "Anyone reading this blog might be forgiven for thinking that I’m rabidly anti-human. A species traitor I may be, in some respects, but I really don’t believe that humankind is inherently evil.

The evil things we do are of course distinct from a natural state of evil, as it were. The two are entirely different.

Take a new born human child, and tell him for at least 6,000 years that she’s base, filthy, born to commit evil and in fact has evil built in to the nature of hir being. Surprise, surprise when that child not only fulfills the expectation of evil, but goes on to exceed that expectation.

So it is with humans – told from cradle to cradle that we’re sinful creatures (and separate, moreover, from the rest of creation) in need of a saviour, and behold, the prophecy comes true.
Humanity is not born evil. We are not sinful creatures who stand in need of divine rescuing. We have taken a wrong turning in our journey, this I see is true. One of the mistakes we made was accepting the patronage of saviour gods.
We are animals. When we still listened to our bodies, and learnt from the rest of creation – sometimes seen or envisioned as the Goddess – we were as inherently ‘good’ as any other animal, living embedded in the warp and weft of our Mother.
We’ve not so much fallen as sauntered vaguely downwards to the place where we now stand upon the almost-ruins of our home, dioxins in every mother’s breast milk and toxins in the very land, sea and sky we claim to revere, people dying from cancers directly caused by our degrading and toxifying of the environment, the rest of nature limping on crippled feet in our wake, and stupidly asking ourselves how we could have come to this.
It is not the saving grace of a father god sacrificing his son that we stand in need of, now. We stand in need – in dire need – of a waking-up, a rousing from the hypnotic state we’ve bumbled around in for thousands of years. A clearing of the mind and of the vision before the mass media assimilates us all.
Will we get there? Who can say?
Certainly not me."
- Aquila Ka Hecate, http://aquilakahecate.blogspot.com/
Aquila Ka Hecate is an Anarcho-Primitivist Shaman from Johannesburg, South Aftrica.
Posted by CoyotePrime at 4:11 PM