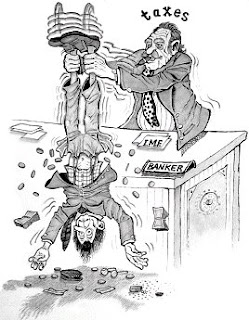 "The U.S. government and the Federal Reserve have spent, lent or guaranteed $12.8 trillion, an amount that approaches the value of everything produced in the country last year, to stem the longest recession since the 1930s. New pledges from the Fed, the Treasury Department and the Federal Deposit Insurance Corp. include $1 trillion for the Public- Private Investment Program, designed to help investors buy distressed loans and other assets from U.S. banks. The money works out to $42,105 for every man, woman and child in the U.S. and 14 times the $899.8 billion of currency in circulation. The nation’s gross domestic product was $14.2 trillion in 2008.
President Barack Obama and Treasury Secretary Timothy Geithner met with the chief executives of the nation’s 12 biggest banks on March 27 at the White House to enlist their support to thaw a 20-month freeze in bank lending. “The president and Treasury Secretary Geithner have said they will do what it takes,” Goldman Sachs Group Inc. Chief Executive Officer Lloyd Blankfein said after the meeting. “If it is enough, that will be great. If it is not enough, they will have to do more.”
Commitments include a $500 billion line of credit to the FDIC from the government’s coffers that will enable the agency to guarantee as much as $2 trillion worth of debt for participants in the Term Asset-Backed Lending Facility and the Public-Private Investment Program. FDIC Chairman Sheila Bair warned that the insurance fund to protect customer deposits at U.S. banks could dry up because of bank failures. The combined commitment has increased by 73 percent since November, when Bloomberg first estimated the funding, loans and guarantees at $7.4 trillion.
“The comparison to GDP serves the useful purpose of underscoring how extraordinary the efforts have been to stabilize the credit markets,” said Dana Johnson, chief economist for Comerica Bank in Dallas. “Everything the Fed, the FDIC and the Treasury do doesn’t always work out right but back in October we came within an eyelash of having a truly horrible collapse of our financial system, said Johnson, a former Fed senior economist. “They used their creativity to help the worst-case scenario from unfolding and I’m awfully glad they did it.”
- http://www.freedomsphoenix.com/Find-Freedom.htm?EdNo=001&At=048045

This made me think of a scene from the movie "No Country For Old Men", where the Sheriff and Deputy discuss the horrible murders. To paraphrase:
Deputy: "This is really a worst-case scenario, ain't it, Sheriff?"
Sheriff: "Well, if it ain't, it'll do until worst-case scenario gets here."
Posted by CoyotePrime at 9:31 AM