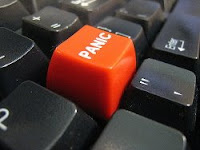 "Assumption: The bailouts and monetary expansion continues- most of the outright cash going to the banking sector, while mostly loans go to productive sectors. Some relief goes directly to citizens, but not nearly as much as those corporate elite deemed "too big to fail". And all of this, including aid to the citizenry, is in essence coming off the backs of the citizenry via future tax burden and/or high inflation. The economy, despite (or because of) these efforts, continues to worsen.
Scenario 1: This is allowed to play out to its end game. Either through deflation or inflation or the combination of both, the US is able to grow nothing but its debt. In the end, the banking elite and those politically connected largely control the nation's means of production by a combination of overwhelming capital positions and collateral seized during defaults. The federal government is in a symbiotic power-sharing relationship with the financial sector, through a combination of nationalization, partial ownership, or control via bailout purse-strings, and has control of the military industrial complex to enforce stability in this new system. The citizenry by and large become slaves to debt, and even large chunks of productive industry, especially small business, suffers the same fate. Standard of living drops significantly for most people, and life in the United States closely resembles a third world nation for most of its citizenry.
Scenario 2: The extremist right wing opposition gains traction and starts to organize. A resurgence of Timothy McVeigh-style domestic terrorism is viewed as freedom fighting by larger and larger portions of the population. Government efforts to clamp down are met with protests, sometimes violent, in cities where National Guard or other service members are mobilized. Worse still, large tracts of the government forces themselves have significant numbers of far right extremists in their ranks. Insubordination rises, and when military officers face court martial for writing opinions which support the increasingly popular view that government is the problem, the situation becomes a Constitutional crisis as free speech proponents clash with those defending civilian control of the armed forces. Eventually a major unit somewhere engages in outright sedition and refuses to follow orders. This electrifies the nation, propelling the far right into power either through armed insurrection or voter dismantlement of the current political landscape.
Scenario 3: As unemployment skyrockets, the government is unable to contain increasingly incendiary populist sentiment. Some bailout fiasco similar to the AIG bonus sparks mass demonstrations in major cities. Some turn violent, especially in at risk areas like Detroit or Los Angeles, and the cities burn as martial law is declared. Forces are met with demonstrations, some turning deadly as protesters are shot, sparking a new wave of anger. Millions of unemployed begin marching in Washington DC and large tent cities spring up on the mall. The government attempts to provide additional assistance, but the unemployment condition continues to worsen. Far Leftist movements gain traction as people begin to blame capitalism and greed and demand the wealth of the banking and corporate elite is seized and given to those in need. The social justice vs property rights argument reaches its climax as either a populist coup overthrows the government, or socialist parties are voted in. The movement is never called 'communism' for the sake of political correctness.
Scenario 2a or 3a: Protesting groups in the United States from any affiliation are met with increasingly draconian government responses. Agencies like the FBI and Homeland Security begin extensive infiltration of most of the groups and domestic surveillance mushrooms out of control, in order to curb the increasingly vocal criticism of the infringement of liberties. To try to curb unemployment, security and police agencies are greatly expanded in size and scope- to the point of a KGB-style permeation of American society. These agencies become so vital and important to government stability, that they gain control of every level of the bureaucracy. Police powers are rapidly expanded and de facto media control by corporations dependent on government support becomes prevalent. Loyalty to the government replaces productivity or ingenuity as the primary societal merit.
Scenario 4: Although the situation in the US deteriorates, it deteriorates much, much more rapidly in the rest of the world. Anti-US sentiment reaches a fever pitch due to some combination of protectionist policies or reprisals and the sentiment that this crisis originated and is the fault of the United States. The dollar is dropped as a reserve currency by nearly every nation outside of the West. Oil embargoes resume, and basing rights are revoked throughout the Middle East as Islamist extremists topple government after government. China dumps its treasuries after some political exchange it views as insulting to its sovereignty. Russia begins a military buildup and sends stabilizing forces to occupy some of the increasingly collapsing Eastern European nations. Tensions continue to escalate. A strike on Iranian nuclear facilities by Israeli aircraft spirals into a regional conflict enveloping the entire Middle East. Border disputes and terrorist activities escalate into a nuclear exchange between India and Pakistan. China and North Korea enter a secret alliance and simultaneously shell Seoul and invade Taiwan. US forces already at the breaking point are forced into hot conflicts in multiple areas. Russia invades Europe with conventional forces. Russia and China turn orbital space into an unusable debris field eliminating US access to space and severely reducing its military capability. Conscription and the command-driven economy returns as the US and what allies it can muster mobilize again for total global war- this time with large numbers of nuclear weapons on the table."
- http://irrationaldoomsdayblog.blogspot.com/
Posted by CoyotePrime at 1:13 PM