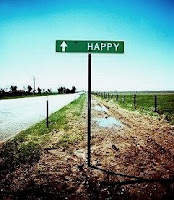 "Volumes have been written on the pursuit of happiness- the Declaration of Independence even calls it one of our "unalienable Rights." Someone who knows a lot about the pursuit of happiness is Gretchen Rubin. She’s a former Supreme Court clerk who left the legal profession to write. Her latest project is 'The Happiness Project'.
Rubin has another happiness myth to add: The Arrival Fallacy. It's the belief that when you arrive at a certain destination, you’ll be happy.
She writes:“We often imagine that we’ll be happy as soon as we get a job/make partner/get tenure/get married/get that promotion/have a baby/move. (But) usually by the time you’ve arrived at your destination, you’re expecting to reach it, so it has already been incorporated into your happiness. You quickly become adjusted to the new state of affairs. And of course, arriving at one goal usually reveals a new goal. There’s another hill to climb. In fact, working toward a goal can be a more powerful source of happiness than hitting it – which can sometimes be a letdown. It’s important, therefore, to look for happiness in the present, in the atmosphere of growth afforded by making gradual progress toward a goal." So make sure you keep dreaming and moving forward. Most of all, remember to find happiness in the pursuit of happiness."
- http://www.cbsnews.com/blogs/2009/04/22/fastdraw/entry4961248.shtml
Posted by CoyotePrime at 10:26 PM