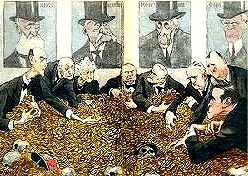 A personal comment: What planet do these sociopaths live on? The true unemployment rate is around 20%, millions of people have lost thier homes through foreclosure, people everywhere are really suffering, and these idiots are threatening to quit their jobs if they don't get more BONUSES? The only reason they still have jobs at all is because of TARP rescue "loans", otherwise they'd be bankrupt, as they should have been, and ALL of them would be looking for jobs, which is what should have happened. If I were one of these clowns, noting the mood of the country right now, I'd shut my stupid mouth, be very grateful to have a job at all, and do absolutely nothing to draw attention to myself. You never know who might be looking...
"Citigroup is worried about losing employees, and trying to figure out how to retain them.CEO Vikram Pandit has talked with Treasury Secretary Timothy Geithner about the possibility of paying special bonuses to keep demoralized workers from getting poached by competitors, a person familiar with the matter said. The person, who spoke on condition of anonymity, was not authorized to disclose details about the private talks. In particular, the New York-based bank is hoping to free its highly profitable energy-trading unit, Phibro, from federal compensation limits, the Wall Street Journal reported late Tuesday. The Treasury has not made a decision on the request, the paper said, and the amount of bonuses requested wasn't disclosed.
A Treasury Department spokesman would not comment on the matter, and Citigroup said in a statement that it has not presented the Treasury Department "with a specific plan for retaining our people. We have also not discussed any specific plan or program designed to give people additional cash bonus payouts." Citigroup has received $45 billion in federal bailout funds over the past several months, and the government has agreed to insure a pool of more than $300 billion in Citigroup assets. Soon, the government will own a 36 percent stake in the bank.
Companies that have accepted federal bailout funds are under tighter limits on how much they pay top executives. The restrictions are intended to prevent the type of taxpayer outrage that ensued after the bailed-out American International Group paid $165 million in retention bonuses to employees despite having received more than $180 billion in federal funds. Banks, though, are chafing at the restrictions. Some smaller banks have quickly repaid bailout funds to end the heightened oversight. Several of the biggest bailout recipients—including JPMorgan Chase, Wells Fargo, Morgan Stanley and Goldman Sachs— have said they want to repay the government as soon as possible. "I do think compensation is a real issue, and I don't think it's going to be business as usual," Morgan Stanley CEO John Mack told shareholders at the bank's annual meeting Wednesday. He said someone at a hedge fund recently told him he could lure any Morgan Stanley employee away, and that he couldn't argue with that assertion.

Executive compensation consultant Steven Hall said many employees are leaving big banks, especially to start their own firms or to join private firms without compensation restrictions. Normally, paying retention bonuses to prevent such an exodus would make good business sense."
- http://www.cnbc.com/id/30466355
Posted by CoyotePrime at 8:18 AM