What is the "Avebury Stone Circle?"

"When in Wiltshire, one should most certainly visit Stonehenge, which is undoubtedly the world's most famous stone circle. But one should also make time to visit Wiltshire's "other" stone circle, Avebury - which holds the distinction of being the largest in the world. 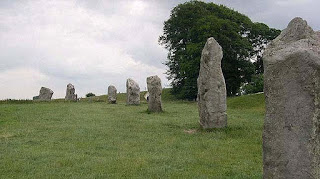 Avebury is believed to have been constructed between approximately 2600 and 2500 BC, though some estimates date the Cove stones of the inner northern circle to as early as 3000 BC. The site actually consists of several circles within circles. The outermost ring is a massive earthwork: A grassy, 20-foot bank of chalk a mile in circumference and 427 meters in diameter. Within this bank lies a ditch, with four entrances (north, south, east, and west). Within this ditch stands the first, and largest, ring of stones, which encloses an area of nearly 28 acres. Once, this ring consisted of 98 sarsen stones; today, only 27 remain standing. It, in turn, encloses two smaller circles. The northern inner ring measures 320 feet in diameter, with only four of its original 27 stones still standing; the southern ring measures 340 feet in diameter, and retains five of its original 29 stones.
By most accounts, these two inner rings are the oldest part of the monument, and the oldest portion of all may be the huge Cove stones, which once stood in the center of the northern circle. Originally there were three; today only two remain, flanking the modern path that winds to the top of the embankment. The sarsen stones, like those of Stonehenge, were brought from Marlborough Downs, some two miles away -- no small achievement, given that some weighed as much as 40 tons! The stones were then raised into position and often set as deeply as two feet into the chalk soil. Excavations of the surrounding ditch show that its creation involved digging away nearly 200,000 tons of rock, using stone tools and antler picks. There are indications that this ditch may have originally been filled with water, so that the stones would have appeared to have been standing upon an island or within a moat."
- http://www.timetravel-britain.com/articles/stones/avebury.shtml 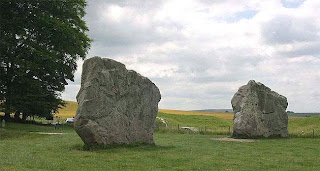 "New Agers believe the Avebury stone circle is the cosmic energy center of England, a focus of ley lines that channel the powers of the universe to a hot little fusion. Well, maybe, but I think not. Still, there can be no doubt that Avebury was a power center in that long ago time when the megaliths were raised.
The primary circle, a quarter-mile in diameter, originally consisted of 98 rough megaliths, each weighing 40 tons or more, dragged from the nearby Marborough Downs. Another 56 stones stood in two inner circles. The whole thing is surrounded by a massive earth bank and deep moat. Archeologists estimate it took more than a million man-hours to build the complex. Nearby, the earth mound known as Silbury Hill looms like a miniature mountain. It has been estimated that heaping up this colossal dirt pile - of uncertain purpose - would have required 18 million man-hours, or 700 men working for 10 years. All this when the population of the region was no more than 10,000 souls. Clearly, this was not the work of a carefree band of peaceable hobbit farmers living in sweet harmony with the land, gathering in their magic circle on seasonal holidays to celebrate the cycles of the sun. Planning and executing such megaprojects surely required massive changes in the way society was organized.
Which sent me back to a book I read many years ago, cultural historian Lewis Mumford's 'The Myth of the Machine.' Mumford begins by emphasizing those human characteristics that do not leave a tangible archeological record -- Homo ludens rather than Homo faber. The burial of a body tells us more about human nature than the tool that dug the grave, says Mumford. With man's persistent exploration of his own organic capabilities, nose, eyes, ears, tongue, lips, and sexual organs were given new roles to play. Even the hand was no mere horny specialized work-tool: it stroked a lover's body, held a baby close to the breast, made significant gestures, or expressed in shared ritual and ordered dance some otherwise inexpressible sentiment abut life or death, a remembered past, or an anxious future. Tool-technics, in fact, is but a fragment of biotechnics: man's total equipment for life.
We catch here a glimpse of hobbit life in the peaceful shire far away from the smoky techno-engine of Mordor. Mumford's book is a warning against letting technique overwhelm those things that are more fundamentally human. At Avebury I think we see on a more modest scale the reorganization of society around technique that Mumford examines in ancient Egypt and the river valleys of the Mideast: The centralization of political power in a kingship or oligarchy, stratification of social classes, a lifetime division of labor, the mechanization of production, the magnification of military power, the economic exploitation of the weak, and the introduction of slavery or forced labor for the purpose of aggrandizing royal stature. Perhaps the peoples of the Marborough Downs in 2500 B.C. turned their hands and minds willingly to the construction of their versions of the pyramids and ziggurats, but I rather suspect it was more like what Mumford describes - more ant colony than hobbit shire.

And, of course, religion would have been part of the mix. The wielders of power - those lords who prepared for themselves those fabulous tombs - held the keys to the afterlife. Religion was the glue that held the machine together, that greased the wheels of megalomania. The subsistence farmer - our happy hobbit - who was corralled from his fields to carry dirt to make the massive Silbury Hill presumably expected his reward beyond the grave. Feminine earth gods were supplemented by a masculine sky-god whose transcendent will was expressed through the divine rights of priests and kings. "Those earth gods and sky gods remained side by side in most cultures," writes Mumford, "but if the vegetation gods continued to be more sympathetic, lovable, and popular, there is no doubt which were the more powerful."
- http://www.sciencemusings.com/blog/2009/04/oldest-road-2.html
Posted by CoyotePrime at 11:40 AM