"What Will They Stand?"

"But if you want to continue to be slaves of the banks and pay the cost of your own slavery, then let bankers continue to create money and control credit."- Sir Josiah Stamp 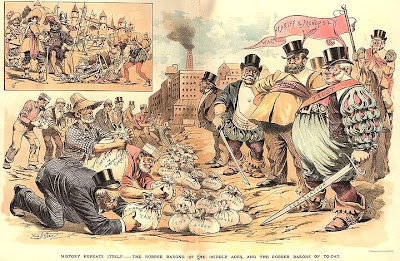 The big question is, "what will they stand?" It goes both directions as we are us and they are them. They, as in them, as in the Big Group of self appointed rulers, as in the policy makers, as in the owners of the world. We, as in us, as in serfs, as in tax payers, as in slaves, as in the poor down trodden, as in the miserable worthless eaters. The question screams out from both sides, "What will they stand?" They hope that we will stand their eugenics, their mass murder, their great cleansing of their world, while we hope they stand our individuality, our freedoms, our customs, our peace. Here in lies the clash of the Titans. They want two classes, themselves as the enlightened elite, while we which are left that are deemed worthy will be the remnant to be their ignorant servants. When the money, mansions, diamonds, yachts, and the jets lose their lustre, all that is left is the ultimate aphrodisiac, power. We wish happiness, they wish destruction. But this time they are treading lightly as they also can decipher history with its recurring decapitations of the Beast from times past. Of course there in lies the rub.
The IRS threatens us with destruction if we don't play along with their owners the Federal Reserve. The Federal Reserve creates the money and loans to the subjects and demands said subjects return a portion of this creation or face the henchmen of the IRS. So do they really need the money? Hello, McFly. They just created twelve trillion for their friends but you have damn well better pay them the two hundred sixteen dollars and fourteen cents by April 15th or your life will become a living hell. Believe me. Now think,.. they create the money..THEY create the money..Being this as obvious do you really think they need your measly sum of fiat digits? Hell no they don't, they want you subjected to their slavery! Get in line, jump through the hoops, grovel like a dog you worthless knave. Or else... Or else the Beast will devour you.
And we know it. We know who is GOD. We stand in the rain with tea bags dangling from our umbrellas to show the Beast our sacrifice. A sacrifice to our god of money that devours the planet. The corporate whore of greed that fouls our air, destroys our waters, and sentences us to slavery, while enabling the military industrial complex to rain death on distant lands, so we can squeak in the rain like the mice we have become all the while whispering, "make no waves, go along to get along, keep a low profile, fly under the radar, keep your head down." How many more adjective terms do we use for cowardice? Why not just say it, "I am scared witless of my government. You win, so please make the end swift and merciful." Instead we "act" like we matter, like we make a difference, and the Beast laughs in the delight of our agony. In signing off please spare me the talk of revolution. Don't be moronic and say, "if we would quit paying taxes the Beast will die." It is past that point."
- Mr Morphed, http://tshtf.blogspot.com/
Posted by CoyotePrime at 12:57 PM