"With 2 minutes 30 seconds remaining in the video, Dan Shaffer, President of Shaffer Asset Management, gives shocking evidence of direct government intervention in the stock market: “Something strange happened during the last 7 or 8 weeks. Doreen you probably can concur on this - there was a power underneath the market that kept holding it up and trading the futures. 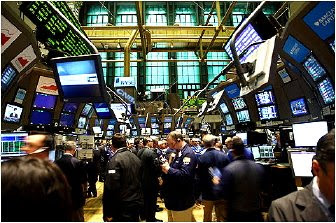 I watch the futures every day and every tick, and a tremendous amount of volume came in a several points during the last few weeks, when the market was just about ready to break, and it shot right up again. Usually toward the end of the day – it happened a week ago Friday, at 7 minutes to 4 o’clock, almost 100,000 S&P futures contracts were traded, and then in the last 5 minutes, up to 4 o’clock, another 100,000 contracts were traded, and lifted the Dow from being down 18 to up over 44 or 50 points in 7 minutes. That is 10 to 20 billion dollars to be able to move the market in such a way. Who has that kind of money to move this market?
On top of that, the market has rallied up during the stress test uncertainty and moved the bank stocks up, and the bank stocks issued secondaries – they issues stock – they raised capital into this rally. It was perfect text book setup of controlling the markets – now that the stock has been issued…” [interrupted by Richard Suttmeier]."
Video here: - http://www.myprops.org/content/EVIDENCE-OF-GOVERNMENT-MANIPULATION
-IN-THE-STOCK-MARKET-Dan-Shaffer-explains-on-Fox-Business-News-video-and-transcript/
"Veteran financial guru Jim Rogers warned CNBC viewers today that the stock market has yet to hit a bottom despite people ploughing their money back into a sucker’s rally, as the Bilderberg Group’s plan to pull the rug out from under euphoric investors draws closer. Rogers said that central banks “flooding the world with money” only attempts to solve the problem of too much debt with more debt and “defies belief,” adding that the method will not work because governments have failed to address the underlying problems that caused the crisis in the first place. “I mean … you give me 5 or 6 trillion dollars, I’ll show you a very good time, there’s no question about that,” Rogers said. “I’m not buying shares if that’s what you mean. Not at all,” Rogers told Squawk Box Asia.”The bottom will probably come later this year, next year, who knows when,” he added.
Rogers’ sentiment is given weight when one considers the noises coming out of the secretive Bilderberg cabal during this year’s conference in Greece. As we reported last week based on investigative journalist Daniel Estulin’s inside sources, investors, whipped up into a false state of euphoria by the belief that the economy is recovering, are being suckered into ploughing their money back into the system as a set up for “massive losses and searing financial pain in the months ahead” as the stock market reverses its uptrend and plummets to new lows. Rogers told CNBC he was still favorable towards commodities and precious metals because they were the only sector where fundamentals were getting better."
http://www.infowars.com/rogers-echoes-warning-of-suckers-rally/

So, you find a puzzle piece here, another there... After awhile, a picture begins to form.
Posted by CoyotePrime at 4:17 PM