"Those two Mars rovers, Spirit and Opportunity, have provided much information about the planet in the five years they’ve been rolling around the surface. Most of the data relates to the central question of the role water might have played in the planet’s past, and a new paper in Science, describing Opportunity’s exploration of Victoria Crater in Meridiani Planum, a plain near the equator, is no exception. The paper, by Steven W. Squyres, a Cornell astronomer, and more than 30 colleagues, summarizes information that has been released over the past several years, and can itself be summarized in two words — wet and windy. As in, water and wind have altered the terrain around the crater as they have done elsewhere, suggesting that the processes are regional in scope. 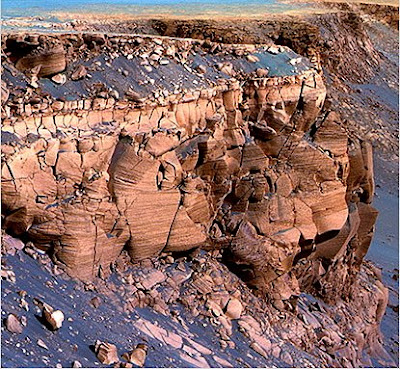 Cape St. Vincent at Victoria Crater on Mars.
The crater has widened, evidence of wind erosion.
The impact that formed the crater (which was originally about 2,000 feet in diameter) ejected sedimentary rocks and exposed layers of sediment along the rim. But there is much evidence of wind erosion — the crater has widened to about 2,500 feet, forming indentations and promontories along the rim, and ejected rocks outside have been planed down, leaving smooth terrain.
Opportunity examined several exposed rocks near the rim and a 30-foot deep section at a spot named Duck Bay. As in explorations of two other craters, spherules of hematite, a form of iron oxide, were found within the rocks and on the surface. Generally, the spherules, which form in wet conditions, increase in size as depth increases, suggesting that groundwater (which would be more abundant with increasing depth) affected the sediments. Like old man river, Opportunity keeps rolling along and is now headed to another crater. All told, it has traveled nearly 10 miles. Spirit has traveled about half that distance, and is now stuck in sand on the other side of Mars."
- http://www.nytimes.com/2009/05/26/science/26obmars.html?_r=1&ref=science
Posted by CoyotePrime at 8:01 PM