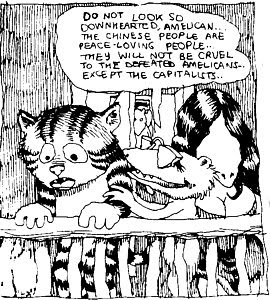 "So, back to the U.S.A.: The United States has entered the third and final stage in the life and death of a great country.
America's history can be divided into three broad stages. The first stage was industrialization. This is what took the United States from a marginal nation of settlers, explorers, farmers, entrepreneurs and religious refugees to become the world's richest and most powerful country. The source of its wealth and power was its factories... and its people. The factories were the best in the world. And the people how labored in them were accustomed to hard work, saving, and self-discipline. There were no free lunches in America during this period. The fastest growing cities of the time were manufacturing centers - Chicago, Gary, Detroit, Pittsburg, and Birmingham. Thanks to its smokestacks and assembly lines, the US could make things better, cheaper and faster than any other country, with the possible exception of Germany before WWI and Japan after WWII. That is how the US became the world's largest creditor - by selling US-made goods to foreigners. And it's how the United States won WWI and WWII too. American factories could turn out more tanks, more planes, more guns and more butter than any other nation. And the United States had an abundant source of fuel too; "Texas Tea" they called it.
After WWII America enjoyed its glory days. It was on top of the world... in practically every sense. The United States was #1.
Nothing fails like success. The New Deal had fundamentally changed Americans' relationship to the state. Federal meddlers began playing a larger and larger role in the economic life of the country. Soon, American attitudes evolved to fit the circumstances. With the world's reserve currency... a huge lead over its competitors... and a government that promised to take care of its wants and needs, the US workforce relaxed. Gradually, it shifted from making things to buying them... while industry turned its focus from production to sales... and then, financing. Then, the United States entered the second stage: financialization.
In this second stage, the center of gravity shifted from the wealth-producing factories to the financial centers - mainly Manhattan. Prices of real estate in New York soared. Wall Street came to be seen not merely as a place to invest the proceeds of honest toil... but a way to create wealth. The most ambitious college graduates turned from engineering and manufacturing first to sales and marketing and later to finance; because that's where the money was. At the peak, in the Bubble Epoch, 2003-2007, Wall Street was drawing in the world's leading scholars in mathematics and statistics... These people were creating the biggest debt bombs in history... exotic, complicated financial concoctions... that eventually blew up in their faces.
Detroit went into a decline as early as the late '60s. GM continued to make cars, but it looked to financing as a way of make money. GMAC became the major source of GM's profits. Still mills along the Monongahela River began to rust in the '70s. Ships began to come to the US laden with goods in the '80s and '90s... and to go back empty. The US Fed tried to stimulate the US economy on several occasions, but it had a strange effect. It put more credit in the hands of US consumers - who used the money to buy goods from overseas. In effect, the US Fed was stimulating manufacturing in China!
But in 2007-2008 the bubble in consumer debt blew up. GM went broke in May of '09. The financialization stage ended. In its place comes a new stage: politicization, the third and fatal phase of a great nation.
Where is the money now? It took the train from Grand Central Station in Manhattan down to Union Station in Washington, DC. Want money? Ask Washington. It's pledged an amount equal to three times what it spent in WWII to the fight against deflation.
Where is the power now? Just ask Chrysler bondholders; in the end it didn't matter what their contracts said... when the US government turned against them, their goose was cooked. The Obama Administration, owner of GM, now sets top salaries and determines what kind of cars the company will make. Washington also determines which businesses will be kept alive - AIG - and which will die - Lehman Bros. Now it's the politicians, not Wall Street, nor investors, who decide the allocation of big capital... And when ambitious young people buy a ticket to begin their careers, are they going to Milwaukee... to Manhattan... or to the lobbyists' mecca in Northern Virginia?"
- Bill Bonner, email: DR@dailyreckoning.com, website: http://www.thedailyreckoning.com
Bill Bonner is the founder and editor of The Daily Reckoning. Bill's book, "Mobs, Messiahs and Markets: Surviving the Public Spectacle in Finance and Politics," is a must-read. He is also the author, with Addison Wiggin, of "The Wall Street Journal best seller Financial Reckoning Day: Surviving the Soft Depression of the 21st Century" (John Wiley & Sons). In Bonner and Wiggin's follow-up book, "Empire of Debt: The Rise of an Epic Financial Crisis," they wield their sardonic brand of humor to expose the nation for what it really is - an empire built on delusions.
- http://www.321gold.com/editorials/bonner/bonner061809.html
Posted by CoyotePrime at 10:30 AM