“I was born and raised on land in Chattanooga, Tennessee, that once belonged to the Cherokee Nation. Beginning in 1838, the Cherokees were rounded up, herded into camps, then forcibly removed from their ancestral lands to new territories in Oklahoma. Their homes were burned, their farms distributed to whites. 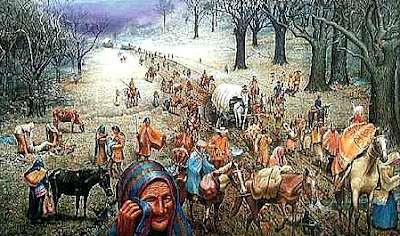 Their transport west is known among the Cherokees and other removed tribes as "The Trail of Tears." Hunger, cold and disease took a heavy toll (nearly a third died along the way). This shameful episode was allowed, organized, and enforced by such American heroes as Justice John Marshall, President Andrew Jackson, and General Winfield Scott. White voices raised in protest were few and far between.
We learned about Marshall, Jackson and Scott in school, but nary a word about the forced expulsions that took place within a few miles of the classroom. The incident had been pretty much erased from the collective memory of the inheritors of Cherokee land. Nothing unusual about any of this. The Trail of Tears was a typical incident in the long colonial history of guns, germs and steel. The Cherokee were relatively fortunate compared, say, to the exterminated native peoples of Tasmania.
One assumes that the perpetuators of these colossal crimes knew in their heart of hearts that what they were doing was wrong. A justification was required, and as usual that meant defining the Cherokees as an inferior race having inferior rights. It was God, after all, who gave peoples of European extraction superior intelligence and moral dignity. The savages were blighted by divine approbation; it might even be debated whether or not they possessed immortal souls. Science too was often enlisted in the effort to show the subjugated peoples inferior.
Greed and injustice will no doubt always be with us, but science at least has been self-correcting. The anthropologist Jared Diamond, who traces the fates of human societies in his Pulitzer Prize-winning “Guns, Germs and Steel,” cites advances in genetics, molecular biology, biogeography, epidemiology, linguistics, geology, and climatology, among other sciences, to account for the successes of the colonizers. No reliable evidence has emerged from science to suggest intrinsic differences of intelligence or moral worth among the human peoples of the Earth. Tomorrow I will cite one extraordinary example of creative genius among the Cherokees, that of the self-taught linguist Sequoyah.
Several years ago I sat in the grass of a new park that was being opened on the banks of the Tennessee River at the place in Chattanooga where the Cherokees were herded aboard boats to begin their forced journey west. We were entertained with wonderful music by Cherokee musicians who had come from Oklahoma. On the rise above us was the stunning new Tennessee Aquarium, with its surrounding terraces and fountains dedicated to the memory of the Trail of Tears and Cherokee culture. The place is called Ross's Landing. John Ross was a Cherokee.”
- Chet Raymo, http://www.sciencemusings.com/blog/2009/06/tending-of-conscience.html
"Along with the Choctaw, Chickasaws, Creeks, and Seminoles, the Cherokee made up what white settlers referred to as the "Five Civilized Tribes." [How kind. CP] They were given this title because they had worked to adopt the customs of the white people. In other words, they assimilated to the white culture.
As white settlers began moving in on Cherokee land, they brought many things that would change the Cherokee way of life. Horses and guns are two examples of this change. Most of the Cherokee chiefs believed that if their people learned to live with the whites then Indian homelands would be honored. During the period from 1730, when the first treaty was signed, to 1838, which marked the final removal of the Cherokee from their homeland on the Trail of Tears, the Cherokee continued to assimilate to the white culture. Most of the Cherokee were seeking to live peacefully along side the whites. The majority of the men were farmers, the women wove their own fabric in order to make clothes similar to the whites, and log cabins replaced the mud huts of their ancestors.

Learning English also became important to the Cherokee, so schools were established. One Cherokee, however, believed it was important to record the Cherokee language, as well. Sequoyah finally succeeded, in 1821, in completing an alphabet to be used in teaching his people to read and write their own language.
Finally, trying to protect their homeland, Cherokee leaders set up a government system designed after the United States system. Even with all these changes, whites still did not see Indians as fit to own land and live along side them. The position of these Americans was supported in 1828 when Andrew Jacksonwas elected president. President Jackson was a war hero and an Indian fighter who believed that the Indians should be removed from the land. In 1830, he signed the Indian Removal Act authorizing the movement of Indian tribes to Indian Territory in present day Oklahoma."
- http://www.uni.edu/schneidj/webquests/standard9/BRENDA/brenda.html
Posted by CoyotePrime at 9:51 AM