The Economy: "Bilge Pumps Running Out of Fuel"

“When the current market bounce is exhausted, the Primary Bear Trend is more likely than not to resume with a vengeance – given that it will be patently obvious to a blind man that the authorities will have thrown everything but the kitchen sink at the economic downturn; and failed to arrest it.” (http://www.marketoracle.co.uk/Article9758.html ) 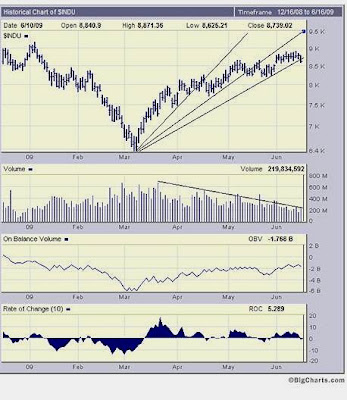 Click image for larger size.
The chart above (courtesy BigCharts.com) reflects two patterns which, when read together, indicate that the Bear Market Bounce might be drawing to a close.
1. The three rising trend lines in the price section of the chart reflect what is known as a “fan formation” and yesterday’s closing price for the DJI Index penetrated the third fan line on the downside. This is bearish.
2. From the middle of March 2009, even though the index was rising in price, the accompanying volume was steadily falling – indicating that it has been more an absence of selling pressure than a presence of buying pressure which has given rise to the rising DJI Index. This is also bearish. Given that the On Balance Volume Chart has not yet given a sell signal it cannot be definitively stated that the Bear Market bounce is about to reverse. However, the evidence suggests that it is probably drawing to a close.
In looking back to the time when the financial Titanic collided with the sub-prime iceberg, it was a matter of pragmatism that the authorities should have been more concerned with keeping the financial ship afloat than in indentifying and addressing the reasons why the collision occurred in the first place. In this context, the authorities’ focus on bailing out the banks and financial institutions was the logical top priority at that time i.e. It was a “necessary evil”.
However, as this analyst has opined on many occasions, the core issue revolves around a lack of understanding on the part of our political and financial authorities regarding what constitutes wealth creation activity. Perhaps one should be less circumloquatious and less charitable about what is really happening. Our political and financial leaders are men and women who are possessed an above average level of intelligence and the probability is high that they absolutely do understand what constitutes wealth creation activity. From their perspective, the question is whether or not a focus on wealth creation activities will get the politicians re-elected and/or will increase the profitability of the financial institutions in the short term (next bonus year)? The answer to both of these questions is a resounding “no”. Seeding wealth creation activities is like planting acorns. Those who plant the acorns typically don’t get to sit under the shade of the oak trees. Ultimately, that’s why the authorities have been dragging their heels. There’s no skin in that game for them personally.
Unfortunately, by throwing money – indiscriminately – at “shovel ready” projects to create job opportunities, and by handing out billions of dollars of tax refund gifts to consumers, all that the authorities achieved was that they pumped the gushing water out of the ship’s flooding hold. Unfortunately, this action did nothing to patch the hole in the ship’s hull or to strengthen the hull itself.
Now the authorities have nowhere to turn. The bilge pumps are running out of fuel and the water is about to start gushing back into the ship’s sodden hull. Unfortunately, the US has used up the goodwill of its creditors and cannot continue to fund the politically motivated gestures of economic largesse which turned out to be nothing more than fingers in the dyke. All this talk of “green shoots” was pure garbage. For example, it takes between 3-5 years for the green shoot of an olive tree to grow to become fruit bearing. In simple English, green shoots take time to mature.
The reality is that, now, if the authorities continue to print money, the US Dollar will tank and there will likely be a rapid escalation of “cost push” inflation within the USA’s borders. Importantly, it needs to be recognized that cost push inflation is very different from “demand pull” inflation. With unemployment in the USA trending towards 11%, and with wages lagging price inflation, demand is unlikely to hold up. This will have seriously deleterious consequences to the economies of those countries which export to the USA and which rely on these exports for their own economic momentum."
Brian Bloom, http://www.marketoracle.co.uk/Article11361.html
Posted by CoyotePrime at 4:46 PM