"A vast mountain range, the size of the Alps and named the Gamburtsev range, has been discovered two miles under the world's largest ice sheet in the Antarctic. 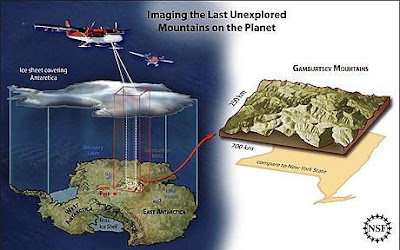 The mountains have been mapped in detail for the first time by bouncing radar signals off their hidden surface and observing how long they took to return. The highest peak was found to be 2,434m (7,985ft) above sea level, about twice the height of Ben Nevis.
Researchers flew aircraft 75,000 miles over six weeks braving average temperatures of -22F (-30) Celsius charting the ancient Gamburtsev range, it was reported in Nature. They predicted a flat plateaux but instead found a range similar in height and shape to the Alps - with massive peaks as high as Mount Blanc and deep valleys. Water, turned to liquid due to the pressure of East Antarctic Ice Sheet above, could be seen in rivers and lakes nestled in valleys.
One lake, named Vostok, was an incredible 187 mile (300km) long making it similar in size to North American Great Lake, Lake Ontario. Scientists hope the findings will aid predictions about the effects of climate change on ice sheets and challenge long-held views that the ice sheet formed over millions of years. The new research suggests they formed in a fraction of the time and the area could have been ice free at some points in history. This means any rapid fluctuation in global temperature could have a much faster effect on the formation of ice sheets than previously thought.
The research was conducted by the Antarctica's Gamburstev Province (AGAP) - a team of scientists, engineers, pilots and support staff from seven nations. They used state of the art radar, aeromagnetic and gravity sensors to map 386,000sq miles (1,000,000sq km) of the Gamburtsev range 2.5 miles (4km) under the East Antarctic Ice Sheet.
Dr Fausto Ferraccioli, a geophysicist at the British Antarctic Survey, led the UK science effort. "We now know that not only are the mountains the size of the European Alps but they also have similar peaks and valleys," he said."And this adds even more mystery about how the vast East Antarctic Ice Sheet formed. If the ice sheet grew slowly then we would expect to see the mountains eroded into a plateau shape. But the evidence now suggests it formed quickly. "Our big challenge now is to dive into the data to get a better understanding of what happened. Our findings are like the first page of a big book."
- http://www.telegraph.co.uk/news/worldnews/antarctica/5442820/
Mountain-range-as-big-as-Alps-discovered-under-Antarctic-ice.html
Posted by CoyotePrime at 7:20 PM