"This Is Your Brain on Rose Colored Glasses" 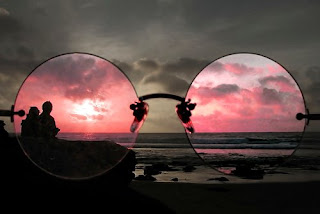 "Sure, being in a good mood changes the way you see the world, but it also looks like it changes the way the brain works. Dr. Adam Anderson, an Assistant Professor of Psychology at the University of Toronto, has been using functional MRI to look at how the mood we're in affects the way the brain works. Anderson had people look at a picture that either put them in a good mood or a bad mood, and then had them do a simple task that measured their attention. At the same time, he looked at their brain activation levels with the fMRI scans. It turns out that people in a positive mood took in more information about the world around them, while people in a negative mood took in less. Anderson says the brain is like a camera and the particular mood we're in is kind of like a lens that determines how much of the world we see. The idea is that the way we perceive the world - and therefore think about it - is heavily influenced by our emotional state.
A University of Toronto study provides the first direct evidence that our mood literally changes the way our visual system filters our perceptual experience suggesting that seeing the world through rose-coloured glasses is more biological reality than metaphor. "Good and bad moods literally change the way our visual cortex operates and how we see," said Professor Adam Anderson of psychology. "Specifically our study shows that when in a positive mood, our visual cortex takes in more information, while negative moods result in tunnel vision. The study appears in the 'Journal of Neuroscience.'
The U of T team used functional magnetic resonance imaging to examine how our visual cortex processes sensory information when in good, bad and neutral moods. They found that donning the rose-coloured glasses of a good mood is less about the colour and more about the expansiveness of the view.
The researchers first showed subjects a series images designed to generate a good, bad or neutral mood. Subjects were then shown a composite image, featuring a face in the centre, surrounded by "place" images, such as a house.To focus their attention on the central image, subjects were asked to identify the gender of the person's face. When in a bad mood, the subjects did not process the images of places in the surrounding background. However, when viewing the same images in a good mood, they actually took in more information - they saw the central image of the face as well as the surrounding pictures of houses. The discovery came from looking at specific parts of the brain - the parahippocampal "place area" - that are known to process places and how this area relates to primary visual cortical responses, the first part of the cortex related to vision. Images from the experiment are here.
"Under positive moods, people may process a greater number of objects in their environment, which sounds like a good thing, but it also can result in distraction," said Taylor Schmitz, a graduate student of Anderson's and lead author of the study. "Good moods enhance the literal size of the window through which we see the world. The upside of this is that we can see things from a more global, or integrative perspective. The downside is that this can lead to distraction on critical tasks that require narrow focus, such as operating dangerous machinery or airport screening of passenger baggage. Bad moods, on the other hand, may keep us more narrowly focused, preventing us from integrating information outside of our direct attentional focus."
The research is supported by the Canadian Institutes of Health Research and the Canada Research Chairs program.
http://www.sott.net/articles/show/187358-This-is-your-brain-on-rose-coloured-glasses
Posted by CoyotePrime at 2:00 PM