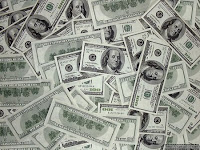 "It is a worst case scenario, but Neil Barofsky, the inspector general for the Troubled Asset Relief Program, has said the bailouts, bank rescues and other economic lifelines could end up costing the federal government as much as $23.7 Trillion. To put this number into perspective, it is nearly double the nation’s entire economic output for a year, more than the cost of all the wars the United States has ever fought combined and the most the federal government has spent on any single effort in American history. It is about $80,000 for every U.S. citizen.
Printing and borrowing $800 billion to hand over to the banks with no strings attached never seemed like a good idea. We wrote about it back in October of 2008 in this article.* And despite some 80% of Americans being against the bailouts, our elected officials decided to hand over taxpayer money to their banker buddies anyway. Many of the banks that got federal aid to support increased lending have instead used some of the money to make investments, repay debts or buy other banks. It is not clear whether the report will also disclose the banks’ use of the bailout money to pay executives fat bonuses which they used to buy gold toilets and prostitutes, and to lobby Congress to stop any meaningful reform.”
It is infuriating and does not bode well for the U.S. dollar or our economic future. There is a point on the horizon when foreign governments and banks are going to stop buying our debt and holding our dollars. First we had news that the 2009 deficit had already topped $1 Trillion for the first time in history. As if that wasn’t bad enough, the sticker shock from this latest estimate is really going to upset some of our Eastern trading partners.
A figure like $24 Trillion just might be the breaking point for an already furious Chinese administration that has thus far been willing to support the dollar and our government’s spending binge for fear of losing American consumer demand. The tipping point comes when it is no longer worthwhile for China, Japan and others to continue financing America and propping up our sick economy. While I used to believe that point was still a few years away, it now seems to be rushing upon us full throttle. When the dollar collapse begins, I expect the drop to be fast and furious. Savvy people will want to be positioned well before the bottom falls out."
- Jason Hamlin,
http://seekingalpha.com/article/150175-24-trillion-reasons-to-buy-gold?source=article_sb_popular
*http://www.goldstockbull.com/articles/bailout-bullshit/
Posted by CoyotePrime at 8:33 AM