"Cueva de las Manos (Spanish for Cave of the Hands) is a cave located in the province of Santa Cruz, Argentina, 163 km (101 mi) south from the town of Perito Moreno, within the borders of the Francisco P. Moreno National Park, which includes many sites of archaeological and paleontogical importance. The Cave lies in the valley of the Pinturas River, in an isolated spot in the Patagonian landscape, some 100 km (62 mi) from the main road, National Route 40. It is famous (and gets its name) for the paintings of hands, made by the indigenous inhabitants (possibly forefathers of the Tehuelches) some 9,000 years ago. The composition of the inks is mineral, so the age of the paintings was calculated from the remains of bone-made pipes used for spraying the paint on the wall blocked by the hand. The main cave measures 24 m (79 ft) in depth, with an entrance 15 m (49 ft) wide, and it is initially 10 m (33 ft) high. The ground inside the cave has an upward slope; inside the cave the height is reduced to no more than 2 m (7 ft). 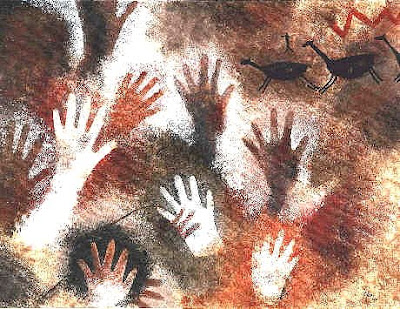 The images of hands are often negative (stencilled). Besides these there are also depictions of human beings, guanacos, rheas, felines and other animals, as well as geometric shapes, zigzag patterns, representations of the sun, and hunting scenes. Similar paintings, though in smaller numbers, can be found in nearby caves. There are also red dots on the ceilings, probably made by submerging their hunting boleadoras in ink, and then throwing them up. The colours of the paintings vary from red (made from hematite) to white, black or yellow. The negative hand impressions are calculated to be dated around 550 BC, the positive impressions from 180 BC, and the hunting drawings to be older than 10,000 years.
Most of the hands are left hands, which suggests that painters held the spraying pipe with their dexterous hand. The size of the hands resembles that of a 13-year-old boy, but considering they were probably smaller in size, it is speculated that they could be a few years older, and marked their advancement into manhood by stamping their hands on the walls of this sacred cave."
- http://en.wikipedia.org/wiki/Cueva_de_las_Manos