"'Bank Holiday? Devaluation? Something Is About To Happen" 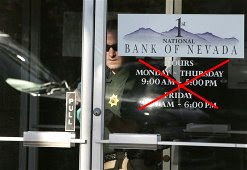 "The top-performing letter that predicted the Crash of 2008 now predicts a confiscatory Franklin D. Roosevelt-style "bank holiday." The Harry Schultz Letter (HSL) was my pick for Letter of the Year in 2008 because it really did predict what it rightly called a coming "financial tsunami."
In its current issue, HSL reports rumors that "Some U.S. embassies worldwide are being advised to purchase massive amounts of local currencies; enough to last them a year. Some embassies are being sent enormous amounts of U.S. cash to purchase currencies from those governments, quietly. But not pound sterling. Inside the State Dept., there is a sense of sadness and foreboding that 'something' is about to happen ... within 180 days, but could be 120-150 days."
Investment advisor and former Army Counterintelligence officer Bob Chapman* is saying the same thing, reporting on the possibility of a so-called “bank holiday” planned for late August or early September. According to Chapman’s sources, U.S. embassies around the world are selling dollars and stockpiling money from respective countries where they operate. The rumors of embassies being advised to stockpile local currency is stunning and - if true - point to a possible huge devaluation in the dollar. Leading trend forecaster Gerald Calente has also repeatedly predicted a "bank holiday".
Yes, yes, it's paranoid. But paranoids have enemies - and the Crash of 2008 really did happen. HSL's suspicion: "Another FDR-style 'bank holiday' of indefinite length, perhaps soon, to let the insiders sort out the bank mess, which (despite their rosy propaganda campaign) is getting more out of their control every day. Insiders want to impose new bank rules. Widespread nationalization could result, already underway. It could also lead to a formal U.S. dollar devaluation, as FDR did by revaluing gold (and then confiscating it)." HSL is still sticking with its 20-year "V" formation forecast, but emphasizes that within the current 10-year downtrend phase there will be rallies that will "last 1-2 years."
- Peter Brimelow, http://www.marketwatch.com/story/schultz-paints-bleak-picture-of-future
*Bob Chapman, http://theinternationalforecaster.com/
Posted by CoyotePrime at 8:30 PM