"Can Stress Make Us 'Creatures of Habit?'" 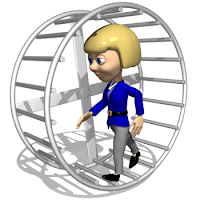 "Can Stress Make Us 'Creatures of Habit?'"
by Ned Potter
"You may identify with the rats in a new Portuguese study. When exposed to daily chronic stress - being cooped up in a plastic tube for half an hour, say, or forced to swim for 10 minutes - they soon became lousy decision makers, relying on habit instead of actively thinking about whether to press a lever to get a food pellet. Sound familiar? The stresses we face are different - morning traffic, unsympathetic bosses, the recession - but over time they get to us. How often do we talk about burned-out people who are just going through the motions?
"Have you ever meant to stop by the grocery store on the way home after a bad day at work, and instead just forgot and went straight home?" said Rui Costa of the National Institute on Alcohol Abuse and Alcoholism, one of the study authors. "You do the automatic thing instead of doing what you had planned."
That's what happened to the rats. For three weeks they were exposed to a standard regimen of randomly timed stresses, such as being confined in a tube, or briefly "bullied" through a plastic window by intruder rats. (Scientists are sensitive about being accused of cruelty to animals, so these are practices established by the National Institutes of Health and its European counterparts.) At the same time, they were given a standardized test: press a lever to get a sugar treat. After three weeks, they were significantly worse at it than they had been at the start of the experiment. Unlike other rats, said Costa, they pressed the levers in the same pattern they always had - even if they had already had their fill of treats. They appeared to follow habits instead of making a decision about whether they were hungry for a reward. And there's more to it. The researchers found brain changes in the rats. Parts of the brain believed to control "goal directed behavior" shrank slightly - but an area thought to be important for forming habits, known as the dorsolateral striatum, actually grew.
The study, by Portuguese and American scientists, is in this week's edition of the journal "Science." The "Science" editors, perhaps playfully, suggested in a release that the rats became "creatures of habit." "I'm not at all surprised that decision-making was affected," said Dr. Sudeepta Varma, a clinical assistant professor of psychiatry at New York University's school of medicine. She was not involved in the experiment, but she has worked with people who endured the trauma of Sept. 11, and has seen how they have been affected. "One of the symptoms of Post Traumatic Stress Disorder is an effect on memory and concentration," she said. "Even after they've undergone treatment, these areas lag. They can't find their keys, they forget appointments, things like that."
- Ned Potter, http://abcnews.go.com/Technology/MindMoodNews/story?id=8211974&page=1
Posted by CoyotePrime at 12:55 PM