"The End Of Fossil Fuel"
by Chris Nelder
"Prepare for a radically different lifestyle as global crude oil production peaks and begins to decline. You will never see cheap gasoline again. You will probably never see cheap energy again. Oil, natural gas and coal are set to peak and go into decline within the next decade, and no technology can change that. 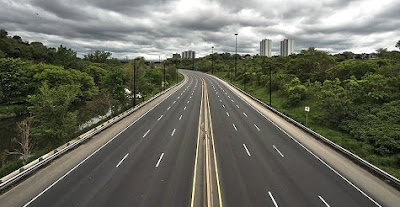 Peaking is a simple concept. We generally exploit natural resources in a bell-shaped curve, with the rate of extraction increasing over time until we reach a peak and then gradually slowing down until we stop using them. Peak oil is not about "running out of oil"; it's about reaching the peak rate of oil production. It's not the size of the tank that matters, but the size of the tap. The peak is usually reached when resources become too difficult to extract, or too expensive, or they are replaced by something cheaper, better or more plentiful. Unfortunately, we have no substitutes for oil that are cheaper or better.
According to the best available data, we are now at the peak rate of oil production. After over a century of continual growth, global conventional crude oil production topped out in 2005 at just over 74 million barrels per day (mbpd) and has remained at that level ever since. The additional "oil" that brings the oft-cited world total to 84 mbpd today (down from 87 mbpd last year; according to U.S. government data) isn't conventional crude, but, rather, unconventional hydrocarbons, including natural gas liquids, "extra heavy" oil, synthetic oil made from Canadian tar sands, refinery gains, liquids produced from the conversion of coal and natural gas, and biofuels.
Oil production is expected to go into terminal decline around 2012. The principal reason is that the largest and most productive fields are becoming depleted while new discoveries have been progressively smaller and of lesser quality. Discovery of new oil peaked over 40 years ago and has been declining ever since despite furious drilling and unprecedentedly high prices. When it begins to decline, rate of crude production is projected to fall at 5%, or over four mbpd, per year--roughly equivalent to losing the entire production of Latin America or Europe every year. The decline rate will likely accelerate to over 10% per year by 2030.
The Paris-based International Energy Agency estimates that the world would need to add the equivalent of six new Saudi Arabias by 2030 in order to meet declining production and growing demand. Obviously, there aren't another six Saudi Arabias waiting to be discovered, and unconventional liquid fuels simply cannot fill such a yawning gap. Natural gas is likewise expected to peak some time around 2010-2020, and coal around 2020-2030. Oil, natural gas and coal together provide 86% of the world's primary energy.
By the end of this century, nearly all of the economically recoverable fossil fuels will be gone. From now until then, what remains will be rationed by price. There will be shortages. Renewable energy--solar, wind, geothermal--currently makes up less than 2% of the world's primary energy supply, and although growing very rapidly, it is not on course to fill the fossil fuel gap, either.
As fossil fuels peak and then decline, the world's economies will be forced for the first time to live within a shrinking, not expanding, energy budget. They will adapt to this new reality by repeating the cycle we saw over the last 18 months: commodity price spikes, leading to economic destruction, leading to supply destruction, leading back to price spikes. Only in recessionary periods, like now, will there be excess supply.
How this will affect the global economy, and our lifestyles, cannot be overstated. Former chief economist for Canadian Imperial Bank of Commerce World Markets, Jeff Rubin, and oil investment banker Matthew Simmons have concluded that it means no less than the end of globalization. Americans, who constitute 4% of the world population but consume 25% of its energy, will have radically different lifestyles. Production of everything will have to be re-localized. Instead of our food traveling an average 1,500 miles before it reaches us, it will have to come from nearby and use organic methods instead of requiring 10 calories of fossil fuel inputs for every calorie of food we eat. Rather than shipping ore to China and shipping it back to the U.S. as steel, we'll need to revive our domestic steel industry. "Bedroom communities" will die and ideally be reborn as fully functional independent communities. It means the end of long commutes.
The coming energy shortage is the most serious crisis the world has ever faced, but it could have a very positive outcome. In theory, the Earth's wind, solar, geothermal and marine resources could each provide more than the total energy the world consumes every day, if we had the ability to harvest them. As fossil fuel prices rise, the price of renewably generated electricity will continue to fall. If we are wise and lucky, we will rapidly improve the efficiency of our built environment, deploy renewable capacity and convert to an all-electric infrastructure that runs on it. Fortunately, political momentum is now leaning strongly in this direction.
If we move fast to re-localize production and proceed with the renewable revolution, we could end the 21st century with a largely carbon-free economy, putting an end to climate change and averting resource wars. We would have healthier food and a safer, more resilient and equitable world."

Chris Nelder is the author of "Profit from the Peak-The End of Oil and the Greatest Investment Event of the Century" and the coauthor of "Investing in Renewable Energy." He blogs on GetRealList.
- http://www.forbes.com/2009/07/24/peak-oil-production-business-energy-nelder.html
Posted by CoyotePrime at 1:35 PM