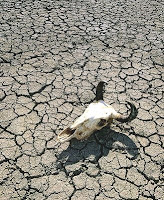 "Western US Facing Water Catastrophe"
by Bruce Finley
"A new study projects that all reservoirs along the Colorado River - which provide water for 27 million people in seven Western states, including Utah - could dry up by 2057 because of climate change and overuse.
If warming led to a 10 percent reduction in the river's flow, it would create a 25 percent chance of depletion, according to the University of Colorado research released this week. Warming resulting in a 20 percent reduction would raise the chance of depletion to 50 percent, the study found.
"In the short term, the risk is relatively low," said Balaji Rajagopalan, associate professor of civil environmental and architectural engineering at the university and lead author on the study, which was accepted for publication by the American Geophysical Union. "But after that, the risk escalates enormously. If you do nothing, and you have no policies in place, even drastic measures such as cutting people off will not help from staving off catastrophe."
Researchers at the National Oceanic and Atmospheric Administration and Bureau of Reclamation participated in the study. Rajagopalan said the study was done in response to a 2008 University of California study that found a one-in-two chance that overuse and warming could deplete reservoirs much sooner - by 2021.
A 10-year drought along the Colorado River, which runs 1,450 miles from the Rocky Mountains to the Gulf of Mexico, has created anxiety. Lawyers are looking into how down-river users such as Californians might assert water rights if reservoirs dried up. Authorities with Denver Water, the utility that supplies water to Denver and many of its suburbs, questioned the conclusion that, with sharp climate change and robust population growth, all reservoirs could be depleted. "Not true," said David Little, director of planning for Denver Water. Little referred to other studies indicating that the upper parts of the Colorado River Basin likely will become wetter. If overuse and climate change did dry up lower basin reservoirs such as Lake Powell and Lake Mead, Denver could see an influx of people, Little said. People in California, Nevada, Arizona and New Mexico "are going to tend to migrate to places where they have water."
Dozens of dams along the Colorado River trap 60 million acre-feet of water in reservoirs -- four times the annual flow of the river. (An acre-foot is the volume of water needed to cover an acre to a depth of one foot, or 325,851 gallons, enough to sustain a family or two for a year.) The reservoirs along the river supply cities including Phoenix and Las Vegas. Drought in recent years has dropped water levels in those reservoirs to less than half full. Currently, the reservoirs are about 59 percent full.
Study authors advocated "adaptive management" of supplies, with basin-wide discussion of how best to reduce down-river use and ramp up efficiency. "Use the time to put together policies that can be sustainable," Rajagopalan said. "There's lots of room for creative policy. We need to start right now - not wait."
- Bruce Finley, "The Salt Lake Tribune"
- http://www.sott.net/articles/show/189771-West-of-the-United-States-faces-water-catastrophe-
Posted by CoyotePrime at 7:49 AM