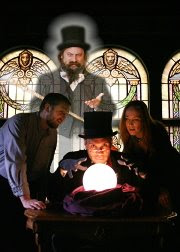 "Séance on Wall Street"
by Dean Baker
"There is a long history of mediums who claim to communicate with the dead. They sell their services to people anxious to talk to relatives or great figures of the past. Such exercises can be dismissed as harmless entertainment – people spend a few dollars to be treated to tall tales. There is a Wall Street equivalent to these séances. People who claim to be knowledgeable about financial markets tell policy makers and reporters what the financial markets are thinking about current policy. These Wall Street seers claim to interpret events in financial markets for those of use who are less familiar with the mysteries of market movements.
In recent weeks, the Wall Street seers have been spinning stories about how the financial markets are very worried over the U.S. budget deficit. They have told us that the markets are concerned about the government’s ability to repay its debt. The seers tell us that the markets may soon demand much higher interest rates, if the government does not get its deficit under control. The seers tell us that the government must take steps to rein in the budget deficits projected for the future by cutting back Medicare and Social Security. They also warn us about the risks of adding to the deficit with health care reform. And, the seers tell us that we certainly should not try to tackle the problem of 25 million unemployed or underemployed workers with another big round of stimulus. That would make the financial markets very angry.
Those of us who were not born with the gift of being able to communicate with financial markets cannot directly evaluate the information that the financial markets are passing on to the Wall Street seers. However, we can easily determine the risk that investors assign to holding long-term U.S. government debt. This requires looking at interest rates.
Interest rates appear to be directly contradicting the seers’ assertions about financial markets. The interest rate on 10-year Treasury bonds is currently near 3.5 percent. The interest rate is not determined by people rattling off their visions about future debt defaults; it is determined by investors putting their money on the line. These investors are willing to hold hundreds of billions of dollars in long-term government debt at a return of just 3.5 percent. By contrast, they demanded a return of more than 5.0 percent in 2000, back when the U.S. government was running a large budget surplus. If there is widespread fear in financial markets of a default on government debt, it is difficult to understand why investors would be willing to hold it at such a low rate of return. Usually investors demand high returns for holding risky assets.
In addition to interest rates, we could evaluate the seers’ assessment by trying to carry through other implications of the bad news debt default scenario. Presumably, the stock market would be headed downwards with the financial sector stocks leading the way. After all, a default on U.S. government debt would be cataclysmic for the U.S. economy and especially for the banks who hold trillions of dollars in government debt or government-backed debt. Here also the news doesn’t seem to fit the seers’ vision. The markets have been rallying lately, and many financial stocks are doing quite well.
One piece of evidence that these seers have occasionally used to support their case is the fact that the price of credit default swaps on U.S. debt have risen. Credit default swaps (CDS) are in effect insurance against default. If the price of this insurance rises, then presumably the markets judge default to be a more likely event. That is the reason that people in their 60s pay more for life insurance than people in their 20s.
There is one problem with this story. The payoff of a CDS depends not only on the default but also – as those who did business with AIG know – the ability of the counter-party to pay. What is the likelihood that J.P. Morgan, Goldman Sachs, or anyone else will be left standing in a world where the U.S. government has defaulted on its debt? It’s not clear what the price of CDS issued on U.S. government bonds means, but it is not a straightforward assessment of the probability of default on the government’s debt.
It should not be surprising that the vision of the Wall Street seers seem to be far from reality. After all, their crystal balls could not see the $8 trillion housing bubble, the collapse of which has wrecked the economy. In fact, the self-proclaimed seers are using their visions to try to discourage the public from supporting policies that the seers don’t like. These people want to see cutbacks in Social Security, Medicare, and other social programs. They are more concerned that higher deficits could mean higher taxes on the wealthy at some point in the future than they are about the tens of millions of unemployed or under-employed today.
In short, those who want fantastic stories about the unknowable would be much better off visiting the people who promise to communicate with the dead than listening to the Wall Street spokespeople. They will learn more and be associating with people of greater integrity."

Dean Baker is the co-director of the Center for Economic and Policy Research (CEPR).
He is the author of "Plunder and Blunder: The Rise and Fall of the Bubble Economy."
- http://counterpunch.org/baker07212009.html
Posted by CoyotePrime at 8:18 PM