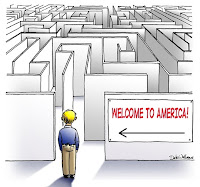 "Street Fighting Man"
by Doug Casey
"Longtime readers know my standard response to questions about the severity of the Greater Depression: It's going to be worse than even I think it's going to be. "Coming Collapse" books will undoubtedly accumulate into an entire genre in the next few years, as they did a generation ago. This time it's not just fear mongering, although things won't get as bad as in James Kunstler's book "The Long Emergency" and certainly not as rough as in the movies "Road Warrior" or "I Am Legend." But it's a good bet that a lot more is going to change than just some features of the financial system. Let's engage in a little speculation as to the shape of things to come.
I've long believed that this depression would not only be much different but much worse than the unpleasantness of the '30s and '40s. In those days, only a few people were involved in the financial markets; now almost anyone with any assets at all is a player. In those days, there were no credit cards, consumer debts, or student loans; now those things are ubiquitous. It's true that nobody will lose any money because of bank failures this time around; instead, everybody is going to suffer a loss from a collapse of the U.S. dollar, which is much worse.
In the '30s and '40s, the U.S. population was still largely rural in character, including people living in the cities. The average American was just off the farm and had a lot of practical skills as well as traditional values. Now he has skills mainly at paper shuffling or in highly specialized technologies, and it doesn't seem to me that the values of hard work, self-reliance, honesty, prudence, and the rest of the Boy Scout virtues are as common as they once were. In those days, the U.S. was a creditor to the world and the world's factories to boot; now there are perhaps 8 trillion dollars outside the U.S. waiting to pour back in, and the country is all about consuming, not producing. Even with what the New Deal brought in, there was vastly less regulation and litigation, leaving the economy with much greater flexibility to adjust and innovate; today, few people do anything without consulting counsel.
Of course things are immensely better today than 80 years ago in at least one important way: technology. I love technology, but unfortunately, improvements in that area do nothing to prevent an economic depression or many of the ancillary problems that will likely accompany this one. In fact, it can be a hindrance in some ways.
So, accepting the premise of a depression, let's examine some of its likely consequences..."
Topics examined in the full, long, article referenced below: Civil Unrest, Gun Control, Tax Revolt, War, Peak Oil, Collapse of Suburbia and the Car Culture, Unemployment, Global Smarming, The Political Future, Emigrants and Psychopaths, and A Happy Note. Folks, this is an extremely informative article, well worth reading in it's entirety.
- Doug Casey, http://www.321gold.com/editorials/casey/casey072909.html
Posted by CoyotePrime at 11:14 AM