"Costs and Comparisons"
by Paul Krugman
"The talking heads on cable TV panned President Obama’s Wednesday press conference. You see, he didn’t offer a lot of folksy anecdotes. Shame on them. The health care system is in crisis. The fate of America’s middle class hangs in the balance. And there on our TVs was a president with an impressive command of the issues, who truly understands the stakes. Mr. Obama was especially good when he talked about controlling medical costs. And there’s a crucial lesson there — namely, that when it comes to reforming health care, compassion and cost-effectiveness go hand in hand. To see what I mean, compare what Mr. Obama has said and done about health care with the statements and actions of his predecessor.
President Bush, you may remember, was notably unconcerned with the plight of the uninsured. “I mean, people have access to health care in America,” he once remarked. “After all, you just go to an emergency room.” Meanwhile, Mr. Bush claimed to be against excessive government expenditure. So what did he do to rein in the cost of Medicare, the biggest single item driving federal spending? Nothing. In fact, the 2003 Medicare Modernization Act drove costs up both by preventing bargaining over drug prices and by locking in subsidies to insurance companies.
Now President Obama is trying to provide every American with access to health insurance — and he’s also doing more to control health care costs than any previous president. I don’t know how many people understand the significance of Mr. Obama’s proposal to give MedPAC, the expert advisory board to Medicare, real power. But it’s a major step toward reducing the useless spending — the proliferation of procedures with no medical benefits — that bloats American health care costs. And both the Obama administration and Congressional Democrats have also been emphasizing the importance of “comparative effectiveness research” — seeing which medical procedures actually work.
So the Obama administration’s commitment to health care for all goes along with an unprecedented willingness to get serious about spending health care dollars wisely. And that’s part of a broader pattern. Many health care experts believe that one main reason we spend far more on health than any other advanced nation, without better health outcomes, is the fee-for-service system in which hospitals and doctors are paid for procedures, not results. As the president said Wednesday, this creates an incentive for health providers to do more tests, more operations, and so on, whether or not these procedures actually help patients.
So where in America is there serious consideration of moving away from fee-for-service to a more comprehensive, integrated approach to health care? The answer is: Massachusetts — which introduced a health-care plan three years ago that was, in some respects, a dress rehearsal for national health reform, and is now looking for ways to help control costs.
Why does meaningful action on medical costs go along with compassion? One answer is that compassion means not closing your eyes to the human consequences of rising costs. When health insurance premiums doubled during the Bush years, our health care system “controlled costs” by dropping coverage for many workers — but as far as the Bush administration was concerned, that wasn’t a problem. If you believe in universal coverage, on the other hand, it is a problem, and demands a solution.
Beyond that, I’d suggest that would-be health reformers won’t have the moral authority to confront our system’s inefficiency unless they’re also prepared to end its cruelty. If President Bush had tried to rein in Medicare spending, he would have been accused, with considerable justice, of cutting benefits so that he could give the wealthy even more tax cuts. President Obama, by contrast, can link Medicare reform with the goal of protecting less fortunate Americans and making the middle class more secure. As a practical, political matter, then, controlling health care costs and expanding health care access aren’t opposing alternatives — you have to do both, or neither. 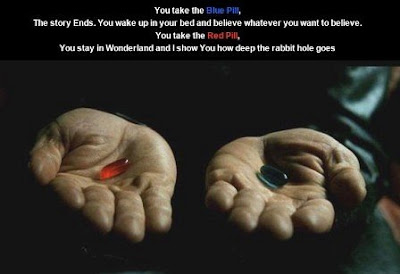 At one point in his remarks Mr. Obama talked about a red pill and a blue pill. I suspect, though I’m not sure, that he was alluding to the scene in the movie “The Matrix” in which one pill brings ignorance and the other knowledge. Well, in the case of health care, one pill means continuing on our current path — a path along which health care premiums will continue to soar, the number of uninsured Americans will skyrocket and Medicare costs will break the federal budget. The other pill means reforming our system, guaranteeing health care for all Americans at the same time we make medicine more cost-effective. Which pill would you choose?"
- Paul Krugman, http://www.nytimes.com/2009/07/24/opinion/24krugman.html?_r=1
Posted by CoyotePrime at 1:46 AM