The Economy: Bill Bonner, "A Worldwide Bubble in Everything" 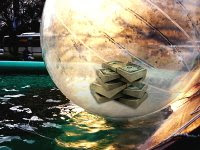 "A Worldwide Bubble in Everything"
by Bill Bonner

"The depression deepens. “These are not layoffs…they’re permanent job losses,” said Barry Ritholtz yesterday morning in his presentation at the Agora Financial Investment Symposium in Vancouver. “These people are not going back to work anytime soon.”
That is the difference between a recession and a depression. In a recession people get laid off…and then they are called back to work when things go back to normal. But in a depression, they are let go permanently. They exhaust their unemployment benefits and become desperate. They must find new employment in new industries. Because things cannot go back to normal; normal is played out.
“In the period, 2001 -2007,” our old friend Marc Faber reminded us in his speech on Tuesday, “the Fed managed to do something that had never before been done – create a worldwide bubble in just about everything. Stocks, bonds, art, oil, housing – you name it; it went up. The only thing that didn’t go up was the dollar.” How did the Fed pull off such a remarkable achievement? Stimulus!
After a half a century of stimulus – with credit, inflation and the money supply growing faster and faster – the Fed put the pedal to the metal following the nano-recession of 2001. It dropped interest rates to just 1% – well below the rate of consumer price inflation – and kept them there until an expansion had been going on for three years.
Stimulus stimulates. By 2007, the world economy was taking curves far too fast. As we guessed, the stimulus didn’t stimulate nearly as well as the meddlers had hoped. Instead of increasing real output in the US, it lured Americans to spend and speculate…and drove Chinese entrepreneurs to put up new factories in order to give them something to buy. In America, debt grew 5 times faster than GDP; for each dollar of extra income, Americans added $5.50 to their debt. In China, manufacturing capacity grew faster than ever. Whole industrial cities, the size of New York or Chicago, were added to the map – in a matter of just a few months. Now the world has too many factories…and too many consumers with no money to consume with.
You’ve heard us tell this tale many times. You’d probably like us to get on with it…and tell you how it turns out. Instead, we keep looking back. “Bubbles had been localized in the past,” Marc explained. “A bubble in one area drew investment from another area. In one market, prices soared. In another they slumped. Overall, things didn’t change much.” But a worldwide bubble in everything is something new. And it caused something else that is new – a worldwide crash. We have been ducking explosions and stepping over the debris for the last two years.
One of the biggest and most obvious consequences of this worldwide bubble is unemployment. Even Ben Bernanke says that joblessness could be a problem for years. What to do about it? More stimulus! “The (Fed) believes that a highly accommodative stance of monetary policy will be appropriate for an extended period,” he said on Tuesday.
Will this new stimulus succeed? Will the depression end soon? ‘No’ is the right answer. Instead, it must run its course. It must eliminate plus capacity and reduce excess debt. Until that is done, the job picture will get worse, not better.
Just look at what is happening in state and local governments. The LA Times: “If the budget deal crafted by Governor Schwarzenegger and top legislative leaders is passed by the legislature and survives the inevitable court challenges, California will undergo perhaps the biggest down scaling of government in its history.” Downscaling government means fewer state-level jobs. Fewer people drawing salaries from the government means more people looking for work elsewhere. But they will not find it in the blown-up industries and zombie companies of 2009. They will have to wait…and wait…and wait… In the race to downscale, California faces swift competition. All over America…and in much of the English-speaking world…governments are forced to cut back.
Just look at what is happening in Ireland. Here, we turn to The Telegraph in London: “Events have already forced Premier Brian Cowen to carry out the harshest assault yet seen on the public services of a modern Western state. He has passed two emergency budgets to stop the deficit soaring to 15pc of GDP. They have not been enough. The expert An Bord Snip report said last week that Dublin must cut deeper, or risk a disastrous debt compound trap. “A further 17,000 state jobs must go (equal to 1.25m in the US), though unemployment is already 12pc and heading for 16pc next year.
“No doubt Ireland has been the victim of a savagely tight monetary policy – given its specific needs. But the deeper truth is that Britain, Spain, France, Germany, Italy, the US, and Japan are in varying states of fiscal ruin, and those tipping into demographic decline (unlike young Ireland) have an underlying cancer that is even more deadly. The West cannot support its gold-plated state structures from an aging workforce and depleted tax base.”
- Bill Bonner, http://dailyreckoning.com/a-worldwide-bubble-in-everything/
Posted by CoyotePrime at 4:25 PM