"Ancient, dome-like rock structures contain clues that life was active on Earth 3.45 billion years ago, according to new research — and the findings could help shed light on life's history on Earth and other planets, including Mars. 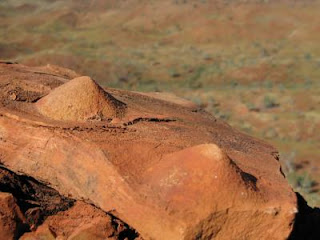 Abigail Allwood, who studies planetary habitability at NASA's Jet Propulsion Laboratory, led the research. She and her colleagues studied stromatolites, which are dome- or column-like sedimentary rock structures formed in shallow water, layer by layer, over long periods of geologic time. Geologists have long known that the large majority of the relatively young stromatolites they study—those half a billion years old or so—have a biological origin; they're formed with the help of layers of microbes that grow in a thin film on the seafloor.
The microbes' surface is coated in a mucilaginous substance to which sediment particles rolling past get stuck. "It has a strong flypaper effect," said John Grotzinger, a Caltech geologist and a study co-author. In addition, the microbes sprout a tangle of filaments that almost seem to grab the particles as they move along. "The end result," Grotzinger explains, "is that wherever the mat is, sediment gets trapped." So in a young stromalite, dark bands indicate organic material. But 3.45 billion years ago, in the early Archean period of geologic history, things weren't quite so simple. "Because stromatolites from this period of time have been around longer, more geologic processing has happened," Grotzinger says. Pushed deeper toward the center of Earth as time went by, these stromatolites were exposed to increasing, unrelenting heat. This is a problem when it comes to examining the stromatolites' potential biological beginnings, he explains, because heat degrades organic matter. "The hydrocarbons are driven off," he says. "What's left behind is a residue of nothing but carbon."
As such, geologists debate whether or not the carbon found in these ancient rocks is diagnostic of life. Allwood and her team turned to the texture and morphology of the rocks themselves, from samples gathered in Western Australia. The samples, says Grotzinger, were "incredibly well preserved." Dark lines of what was potentially organic matter were "clearly associated with the lamination, just like we see in younger rocks. That sort of relationship would be hard to explain without a biological mechanism."
Allwood set about trying to find other types of evidence. She looked at what she calls the "microscale textures and fabrics in the rocks, patterns of textural variation through the stromatolites and—importantly—organic layers that looked like actual fossilized organic remnants of microbial mats within the stromatolites." She saw "discrete, matlike layers of organic material that contoured the stromatolites from edge to edge, following steep slopes and continuing along low areas without thickening." She also found pieces of microbial mat incorporated into storm deposits, which disproved the idea that the organic material had been introduced into the rock more recently, rather than being laid down with the original sediment. "In addition," Allwood notes, "Raman spectroscopy showed that the organics had been 'cooked' to the same burial temperature as the host rock, again indicating the organics are not young contaminants."
Allwood said she, Grotzinger, and their team have collected enough evidence that it's no longer a great leap to accept the stromatolites as biological in origin. And the researchers say the implications of the findings don't stop at life on Earth. "One of my motivations for understanding stromatolites," Allwood says, "is the knowledge that if microbial communities once flourished on Mars, of all the traces they might leave in the rock record for us to discover, stromatolite and microbial reefs are arguably the most easily preserved and readily detected. Moreover, they're particularly likely to form in evaporative, mineral-precipitating settings such as those that have been identified on Mars. But to be able to interpret stromatolitic structures, we need a much more detailed understanding of how they form."
Source: Eurekalert, a media service of the American Association for the Advancement of Science (AAAS). The research appeared in online June 10 and in print June 16 in the Proceedings of the National Academy of Sciences (PNAS).
- http://www.universetoday.com/2009/07/17/ancient-domes-reveal-3-45-billion-year-old-life-history/
Posted by CoyotePrime at 11:36 AM