"The Hedonometer: If You're Happy, Then We Know It" 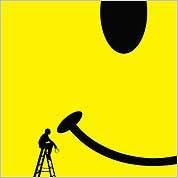 "If You're Happy, Then We Know It"
by Joshua Brown
"In 1881, the optimistic Irish economist Francis Edgeworth imagined a strange device called a "hedonimeter" that would be capable of "continually registering the height of pleasure experienced by an individual." In other words, a happiness sensor. His was just a daydream. In practice, for decades, social scientists have had a devilish headache in trying to measure happiness. Surveys have revealed some useful information, but these are plagued by the unpleasant fact that people misreport and misremember their feelings when confronted by the guy with the clipboard. Ditto for studies where volunteers call in their feelings via PDA or cell phone. People get squirrely when they know they're being studied.
But what if you had a remote-sensing mechanism that could record how millions of people around the world were feeling on any particular day — without their knowing? That's exactly what Peter Dodds and Chris Danforth, a mathematician and computer scientist working in the Advanced Computing Center at the University of Vermont, have created. Their methods show that Election Day, November 4, 2008, was the happiest day in four years. The day of Michael Jackson's death, one of the unhappiest. Their results are reported this week in the Journal of Happiness Studies.
"The proliferation of personal online writing such as blogs gives us the opportunity to measure emotional levels in real time," they write in their study, "Measuring the Happiness of Large-Scale Written Expression: Songs, Blogs, and Presidents." Their answer to Edgeworth's daydream begins with a website, www.wefeelfine.org that mines through some 2.3 million blogs, looking for sentences beginning with "I feel" or "I am feeling."

"We gathered nearly 10 million sentences from their site," Dodds says. Then, drawing on a standardized "psychological valence" of words established by the Affective Norms for English Words (ANEW) study, each sentence receives a happiness score. In the ANEW study, a large pool of participants graded their reaction to 1,034 words, forming a kind of "happy-unhappy" scale from 1 to 9. For example, "triumphant" averaged 8.87, "paradise" 8.72, "pancakes" 6.08, "vanity" 4.30, "hostage" 2.20, and "suicide" 1.25.
The sentence "I feel lazy" would receive a score of 4.38. "Our method is only reasonable for large-scale texts, like what's available on the Web," Dodds says. "Any one sentence might not show much. There's too much variability in individual expression." But that's the beauty of big data sets and statistics. "It's like measuring the temperature. You don't care where the atoms are," Dodds says. "You want to know the temperature of this room or this town. It's a coarser scale. We're interested in the collective story."
Though blog writers do tend to be somewhat younger and more educated than average, they are broadly representative of the U.S. population, writing from most everywhere with an even split between genders and high racial diversity. Since many blogs are connected to demographic data, Dodds and Danforth's approach can let them measure the rise and fall of happiness of, say, people under 35 in California on Wednesdays, and compare to other places, age groups, and days. "We were able to make observations of people in a fairly natural environment at several orders of magnitude higher than previous happiness studies," Danforth says. "They think they are communicating with friends," but, since blogs are public, he says, "we're just looking over their shoulders."
Though their method — which they also apply to song lyrics, presidential speeches, and, recently, to Twitter messages — is generally focused on how writings are received rather than what an author may have intended to convey, it does allow them to estimate the emotional state of the blog authors. "We are thus able to present results of what might be considered a very basic remote-sensing hedonometer," they write (using a slight variant on Edgeworth's spelling). Election Day 2008 showed a spike in the word "proud." "That was the biggest deviation in the last four years," Danforth says. "To have 'proud' be the word that moves the needle is remarkable." In contrast, the day of Michael Jackson's death and the two following were some of the unhappiest, showing a significant dip in average valence scores. Each year, Sept. 11 gets a dip, as does Sept. 10, "in anticipation of the anniversary, we suppose," says Dodds.
Interestingly, their results run contrary to recent social science data that suggest that people basically feel the same at all ages of life. Instead, Dodds and Danforth's method shows a more commonsensical result: young teenagers are unhappiest with a disproportionate use of "sick," "hate," "stupid," "sad," "depressed," "bored," "lonely," "mad," and, not surprisingly, "fat." Then people get happier until they are old, when happiness drops off.
Of course, there is an ocean of philosophical questions to swim when trying to understand happiness. Though people regularly rank happiness as what they want most in life, what is it, really? Plato argued that achieving happiness was our true goal in life but recent studies suggest many people are bad at doing what makes them happy. Why? And what of the Buddhist perspective that all life is suffering? Is happiness simply a feeling?
Though Francis Edgeworth hoped to measure happiness, "exactly according to the verdict of consciousness," all science has to work with today are the tracings of a mind, not a literal mind-probe. New techniques in neuroscience seem to be moving closer to such a tool, but "we don't know what is going on in people's heads, really," says Dodds. "Our study is a data exploration," says Danforth. "It's not about developing a theory." "The big picture for me is this: I have a daughter who is three," he says, "She is going to grow up and fall in love without as much body language or visual cues. She's inheriting an electronic world. We want to develop tools to understand that world."
- Joshua Brown, joshua.e.brown@uvm.edu
http://www.eurekalert.org/pub_releases/2009-07/uov-iyh072409.php
Posted by CoyotePrime at 7:48 PM