A Letter to Cary: "On Death and Dying" 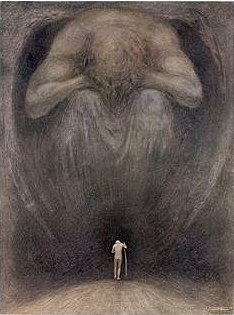 "Dear Cary,
My grandfather is nearing 73, and after a ridiculously long medical history, he is dying. He acts like a bitter old curmudgeon, and this has only increased with time. He pinches waitresses, will scream at my grandmother, etc., etc., etc.

He isn't a mean man, but he is very afraid of death, and as this good night looms ever and ever closer, things only get worse. If the subject strays even close to mortality, his voice shakes and he immediately changes the subject. Maybe I'm just trying to employ the pitiful little psychology I know into an easy explanation. But the thing is, I love him, and I don't want him to be scared. I think that it's one of the worst things that can happen to a person, dying while struggling against it. No one deserves that fate.
But what can I do? He is in the hospital once more, and this time could be for good. I have fantasies of calling him up and forcing him to talk, parrying his every argument, deep into the night, until we both fall asleep with our ears against the phone. Of making him not afraid anymore. What can I say to him, what can I do for him to achieve this? I know full well that it might be simply hopeless, but I can't let myself accept that. For him and myself both, we need peace in this.
Granddaughter
Dear Granddaughter,
We serve the dying by standing as witness. Your job is to let him go as he is. Your job is to mold yourself around him as he is and say I am here, we are here, we witness your passing.
After such knowledge as he has had, after he has seen what he has seen, how is he supposed to surrender mildly to death? Did he survive only for this, to be shoved, pushed, driven inch by inch into the grave? Why should he believe that some sweet, merciful world awaits him after this one? Why should he view this as anything other than one more chapter in a story of defeat? Defeat is not a pretty thought but what else does his experience offer him? On what basis is he supposed to now surrender peacefully? Into whose arms is he supposed to believe he will be welcomed?
I want to write an elegy for your grandfather and I want to write it loud and hard and angry. Indeed, "After such knowledge, what forgiveness?" Why now, after a lifetime of survival against the odds, is he supposed to accept unquestioning the marauding Blitzkrieg of death, the unstoppable westward march of this army about which nothing is interesting except its unstoppable nature? Why surrender to that which offers you nothing in return for your surrender? Where is the prize? Serenity? What can serenity possibly mean to him? Did surrender help him reach his 70s? As he reaches life's final obstacle too large to move and too big to go around will he think, OK, now I get it, I can be at peace? What in his life experience and outlook would provide the fuel for such a moment?
Let's just assume it's not in him. And why should it be? If we fully accept that after all our struggle to survive it comes down to wheezing in a hospital room surrounded by comforters who know nothing of our torment, who wouldn't be angry? As we see that the political sickness we "overcame forever" is alive and well, when we see in our own country that same hot, brutal, juvenile woundedness fueling the fascist heart, that same self-pity masquerading as righteous outrage, that same glory in murderous metal and speed, that same master-race mentality hidden under a sweet song of diversity sung in corporate chapels and read dutifully in the many missals of the Internet ... who wouldn't be pinching nurses and cursing his relatives in his final hour?
Who could trust in a God and go gently into that good night after such a thing as he endured? So give him his fury. Give him his last indignation and last cries of freedom. His due is to die as he is. Give him his due."
Cary
- http://www.salon.com/mwt/col/tenn/2009/07/22/holocaust_survivor/index.html
Posted by CoyotePrime at 12:53 PM