"For many people I know - especially many young people, Native Americans, and others alienated from American dominant culture - the difference between liberals and conservatives is only in technique used to coerce conformity and gain control. 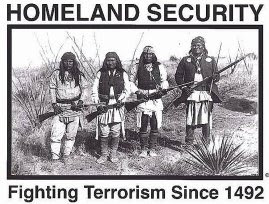 My friend Roland Chrisjohn is a psychologist and a professor in the Native Studies Department at St. Thomas University, and he is also an Oneida of the Iroquois Nation. Roland says, "Protect me from my 'friends'." While his enemies on the right murdered indigenous Americans to steal their land, Indians' so-called liberal "friends" forced assimilation through boarding schools that prohibited the use of tribal languages and customs, which made it easier to divide and conquer and then "legally" rip them off. While the right favored massacres, the liberals preferred "curing" indigenous Americans and came up with sayings like, "Kill the Indian to save the child."
I spend a good deal of time with non-Indian kids who are also not fitting into American society, specifically its schools. A few of these kids are manipulative, exploitative caricatures of a manipulative, exploitative society. But most of the kids I see are a pleasure to hang out with precisely because they don't fit into their schools and society; and for these kids, liberals and conservatives are also two sides of the same oppressive coin.
When I write articles or give talks questioning the wisdom of prescribing kids speed in order to get them to shut up in a classroom, pay attention to a boring teacher, and do their meaningless homework, I get superficially different - but essentially the same - reactions from self-identified conservatives and liberals.
The conservative reacts, "Yeah, these kids don't need medication. They need their parents to get tough with them and show them whose boss. These teachers have their hands tied by liberals. Too much coddling has ruined America."
The liberal reacts, "While I agree that some children are incorrectly diagnosed and improperly medicated, my son was getting Fs in school until he was prescribed Ritalin, and now he is going to college next fall, every parent's dream."
Similar to America's liberal-conservative "Indian problem" debate, something is missing from the liberal-conservative "problem child" debate. What's missing is the possibility that nothing is essentially wrong with these kids. What's missing is the possibility that they simply don't fit into the dominant culture that has opted for efficiency, bureaucracy, and corporate feudalism at the expense of meaningfulness, diversity, and genuine democracy. What's missing is the possibility that perhaps there is something admirable about their rebellion against authoritarian hierarchies and manipulative relationships.
The liberal-conservative media parades ex-maladaptives who are now grateful that authorities have modified them to fit in. Conservatives prefer ex-maladaptives who straightened out after their mother kicked them out of the house or father took the belt to them. Liberals prefer the ex-maladaptives who have been transformed through medical treatments.
Conservatives who have had an easy time fitting into society believe that those people who cannot fit in are lazy, stupid, or undisciplined. Liberals who easily fit into society believe that those people who cannot fit in are diseased or disordered. It is difficult for either of these conservatives or liberals to imagine that their view of progress is another group's view of insanity.
When a society worships itself, there is bigotry not only against those societies that don't share its values but also against individuals within that society who don't buy in. And so "progress" as defined in modernity means that personalities that don't buy into modernity need to be modified.
Do young people who don't comply with authorities for whom they do not respect have oppositional defiant disorder? Do kids who don't pay attention to boring authorities have attention deficit hyperactivity disorder? Do kids who feel threatened by an aggressive and competitive society have social anxiety disorder? Do these young people need to be modified by behavior modifications and medications?
Conservative-liberal American society is sure of itself. It is sure of which cultures are backwards and which personalities need to be modified. And it is sure of its technologies for transforming other cultures and the problematic individuals within it. The goal of genocide and personality-cide is essentially the same: elimination of that aspect of humanity which gets in the way of the dominant culture's view of progress.
The price for all of this arrogance and bigotry is a certain kind of karma. For genocidal practices and stolen land, Indians have certainly not received political, legal, or economic justice. However, there is a justice being meted out for forcing Indians into becoming something they are not. Because of American society's denial and its failure to make amends for this violence, American society's karma is to repeat such coercions with its own children.
American society's karma for ignoring the resentment of Native Americans for forced conformity is that it now ignores its own children's resentment over similar coercion. And American's society is being severely punished for ignoring this resentment. A society's foundation is its families, and in the United States, familial relationships are being destroyed by children's resentment, which acts like a slow-killing poison."
Bruce E. Levine, Ph.D., is a clinical psychologist and author of "Surviving America's Depression Epidemic: How to Find Morale, Energy, and Community in a World Gone Crazy" (Chelsea Green Publishing).
- http://www.sott.net/articles/show/190393-When-Liberals-and-Conservatives-Are-Two-
Sides-of-the-Same-Oppressive-Coin
Posted by CoyotePrime at 6:26 PM