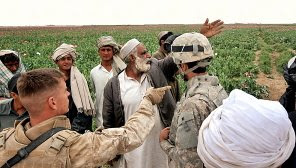 "Hey, guys, don’t pick the poppies. That’s the order from the Obama Administration to the 4,000 Marines presently engaged in Operation Khanjar or “Strike of the Sword,” an invasion of the Taliban infested Helmand Province in southern Afghanistan. The Marines of Bravo’s Company 1st Platoon sleep beside groves of poppies. Troops of the 2nd Platoon walk through the fields on strict orders not to swat the heavy opium bulbs. The Afghan farmers and laborers, who are engaged in scraping the resin from the bulbs, smile and wave at the passing soldiers.
The Helmand province is the world’s largest cultivator of opium poppies - the crop used to make heroin. Afghanistan grew 93 percent of the world’s poppy crop last year, with Helmand alone responsible for more than half of the opium production in the country, according to the United Nations Office on Drugs and Crime.
Heroin, as it turns out, represents the only staple of the Afghan economy. The country manufactures no domestic products for exportation and the rocky terrain yields no cash crops - except, of course, the poppies. The poppies fuel the great jihad against the United States and the Western world. More than 3,500 tons of raw opium is gleaned from the poppy crops every year, producing annual revenues for the Taliban and al Qaeda that range from $5 billion to $16 billion.
Destroying the fields could very well put an end to terrorist activities in Afghanistan and Pakistan.

But the Obama Administration remains intent upon protecting the poppies so that the Afghan farmers and local drug lords can reap the benefits of what purports to be a bumper crop.
Many Marines in the field are scratching their heads over the situation. Jason Striuszko a journalist embedded with the U.S. Marines in Garmser, reports that many of the leathernecks are scratching their heads at the apparent contradictions — calling in airstrikes and artillery on the elusive Taliban while assuring farmers and drug lords that they will protect the poppies. “Of course,” Striuszko says, “those fields will be harvested and some money likely used to help fuel the Taliban, and the Marines are thinking, essentially, ‘huh?’”
“It’s kind of weird. We’re coming over here to fight the Taliban. We see this. We know it’s bad. But at the same time we know it’s the only way locals can make money,” said 1st Lt. Adam Lynch, 27, of Barnstable, Mass. Richard Holbrooke, the Obama Administration’s top envoy in Afghanistan, says that poppy eradication - for years a cornerstone of U.S. and U.N. anti-drug efforts in the country – has only resulted in driving Afghan farmers into the hands of the Taliban.

Richard Holbrooke, the Obama Administration’s top envoy in Afghanistan, says that poppy eradication – for years a cornerstone of U.S. and U.N. anti-drug efforts in the country – has only resulted in driving Afghan farmers into the hands of the Taliban. The new approach, Holbrooke maintains, will try to wean the farmers off the lucrative cash crop by giving them help to grow other produce, like wheat, corn and pomegranates.
Most of the 33,000 U.S. troops in Afghanistan operate in the east, where the poppy problem is not as great. But the 2,400-strong 24th Marines, have taken the field in this southern growing region during harvest season. An expert on Afghanistan’s drug trade, Barnett Rubin, complained that the Marines are being put in such a situation by a “one-dimensional” military policy that fails to integrate political and economic considerations into long-range planning. “All we hear is, not enough troops, send more troops,” said Rubin, a professor at New York University. “Then you send in troops with no capacity for assistance, no capacity for development, no capacity for aid, no capacity for governance.”
Staff Sgt. Jeremy Stover, whose platoon is sleeping beside a poppy crop planted in the interior courtyard of a mud-walled compound, said the Marines’ mission is to get rid of the “bad guys,” and “the locals aren’t the bad guys.” “Poppy fields in Afghanistan are the cornfields of Ohio,” said Stover, 28, of Marion, Ohio. “When we got here they were asking us if it’s OK to harvest poppy and we said, ‘Yeah, just don’t use an AK-47.’”
Paul L. Williams, Ph.D., is the author of such best-selling books as "The Day of Islam," "The Al Qaeda Connection," "Osama’s Revenge: The Next 9/11," "The Complete Idiot’s Guide to the Crusades" and "The Vatican Exposed." An award-winning journalist, he is a frequent guest on such national news networks as ABC News, CBS News, Fox News, MSNBC, and NPR. Williams operates from his blog thelastcrusade.org
- http://thelastcrusade.org/2009/07/07/us-marines-protect-afghan’s-poppy-fields/

And THIS is the "democracy" YOUR sons and daughters are dying for? And where do you imagine all that heroin and opium are going to go? Courtesy of the CIA's world wide distribution network, right here in the US. Then ask yourself WHO is running this show, and making the billions of dollars from it... When will you wake up? We need you...
Posted by CoyotePrime at 9:16 PM