"He could almost be a new Mr Men character with his rotund shape, cute curls and shy smile. But this is really a piglet squid caught in a rare image on camera. 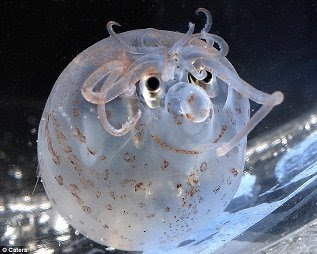 His tentacles made what looks like a mop of curly hair over his large eyes while his skin patterns created a grin. The small squid, which is the size of a large orange, is normally found more than 320ft (100m) below the ocean surface, meaning little is known of its behaviour. Measuring just 4in in length the species has unusual pigmentation and acquired its name from its tuft of arms and tentacles, and rotund shape. Because of its deep water habit, little is known of the behaviour of the squid, although not surprisingly, judging by its body shape, it is known to be a sluggish swimmer.
Properly called Helicocranchia pfefferi, the animals are also noted for the light producing organs known as photophores located beneath each of their large eyes. This specimen was collected by the Cabrillo Marine Aquarium in San Pedro, California, where director Mike Schaat managed to capture it on film."
- http://www.dailymail.co.uk/sciencetech/article-1200485/
What-got-smile-Meet-squid-looks-happy.html#ixzz0LxQZp3JL

This should make amends for the maggot juice post below... ;-)
Posted by CoyotePrime at 9:03 PM