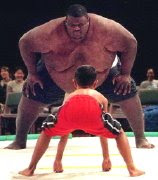 "No Longer Alone, Ron Paul Fights the Fed"
By Sudeep Reddy
Rep. Ron Paul usually stands far outside the mainstream in Congress, particularly in his campaign to kill the Federal Reserve. But the Texas Republican now has the bulk of his colleagues standing alongside him in a fight against the central bank’s autonomy. His bill to audit the Fed, just three pages long, has 274 co-sponsors — every House Republican and almost 100 Democrats — and counting. “People are upset,” he says. “People are demanding more transparency of the Fed, and they’re supporting me on this.”

The longtime Fed critic would prefer an economy without a central bank, where the market sets interest rates and troubled firms are left to sink. He blames the Fed for the past century’s financial bubbles and worries about its ability to monetize debt to finance government spending, even though Fed officials insist they’d never allow it.
Mr. Paul sees transparency as a first step in making the public more aware of the Fed’s ability to electronically print money to support the banking system. The revelations from an audit will “expose to the American people exactly how the Federal Reserve operates,” he says. “Because when they fully understand how they operate, what they do, how they manipulate monetary policy and interest rates, they will finally figure out that it’s the Fed that has caused all the mischief.”
Most of the lawmakers who have signed on as co-sponsors of the legislation don’t share Mr. Paul’s anti-Fed stance. They say Congress has an oversight role and needs a full accounting of how much money the Fed has lent — and to whom. Some lawmakers signed up as an expression of disapproval after learning more about the Fed’s decisions to lend money to firms such as AIG. Many others say greater scrutiny is critical before any discussion of expanding the Fed’s authority in other areas, as the Obama administration proposes. “Bringing transparency and accountability to the Federal Reserve through an audit will help ensure that tax dollars are not wasted,” said Rep. John Boehner of Ohio, the House’s top Republican.
Rep. Brad Sherman, a California Democrat, says none of the Depression-era lawmakers who gave the Fed its power to lend to nonfinancial institutions “ever thought it would involve trillions of dollars.” He said the Fed system’s unique structure, with private officials leading the regional Fed banks, also needs a review by congressional auditors. “Anyone exercising governmental power should be subjected to governmental oversight.”
Even lawmakers who are less eager to sign on acknowledge the momentum. If the Fed gets added responsibilities, “there wouldn’t be any question in my mind that a bill would be passed,” said Rep. Paul Kanjorski, a senior Democrat who has not taken a position on the legislation. “They would have to buy into much more regular audit control of the Fed.”
Mr. Paul recognizes that his movement to audit the central bank ultimately may help the Obama administration expand the Fed’s oversight role in the economy. “I think what they’ll do is they’ll give in to some of the transparency at the same time they’ll give them more power,” Mr. Paul said. “We’re going to be bugging you a lot more. We’re going to be keeping eyes on you. That might be the way. Maybe inadvertently I’ll help them get more power at the Fed.”