Oliver Stone, "JFK and the Unspeakable" 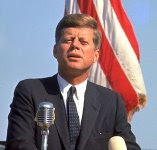 "JFK and the Unspeakable"
by Oliver Stone
"The murder of President Kennedy was a seminal event for me and for millions of Americans. It changed the course of history. It was a crushing blow to our country and to millions of people around the world. It put an abrupt end to a period of a misunderstood idealism, akin to the spirit of 1989 when the Soviet bloc to began to thaw and 2008, when our new American President was fairly elected.
Today, more than 45 years later, profound doubts persist about how President Kennedy was killed and why. My film JFK was a metaphor for all those doubts, suspicions and unanswered questions. Now an extraordinary new book offers the best account I have read of this tragedy and its significance. That book is James Douglass's "JFK and the Unspeakable: Why He Died and Why It Matters." It is a book that deserves the attention of all Americans; it is one of those rare books that, by helping us understand our history, has the power to change it.
The subtitle sums up Douglass's purpose: Why He Died and Why it Matters. In his beautifully written and exhaustively researched treatment, Douglass lays out the "motive" for Kennedy's assassination. Simply, he traces a process of steady conversion by Kennedy from his origins as a traditional Cold Warrior to his determination to pull the world back from the edge of destruction.
Many of these steps are well known, such as Kennedy's disillusionment with the CIA after the disastrous Bay of Pigs Invasion, and his refusal to follow the reckless recommendations of the Joint Chiefs of Staff in resolving the Cuban Missile Crisis. (This in itself was truly JFK's shining moment in the sun. It is likely that any other president from LBJ on would have followed the path to a general nuclear war.) Then there was the Test Ban Treaty and JFK's remarkable American University Speech where he spoke with empathy and compassion about the Soviet people, recognizing our common humanity, the fact that we all "inhabit this small planet. We all breathe the same air. We all cherish our children's futures. And we are all mortal."
But many of his steps remain unfamiliar: Kennedy's back-channel dialogue with Khrushchev and their shared pursuit of common ground; his secret opening to dialogue with Fidel Castro (ongoing the very week of his assassination); and his determination to pull out of Vietnam after his probable re-election in 1964.
All of these steps caused him to be regarded as a virtual traitor by elements of the military-intelligence community. These were the forces that planned and carried out his assassination. Kennedy himself said, in 1962, after he read "Seven Days in May," which is about a military coup in the United States, that if he had another Bay of Pigs, the same thing could happen to him. Well, he did have another "Bay of Pigs"; he had several. And I think Kennedy prophesied his own death with those words.
Why does it matter? The death of JFK remains a critical turning point in our history. Those who caused his death were targeting not just a man but a vision - a vision of peace. There is no calculating the consequences of his death for this country and for the world. Those consequences endure. To a large extent, the fate of our country and the future of the planet continue to be controlled by the shadowy forces of what Douglass calls "the Unspeakable." Only by unmasking these forces and confronting the truth about our history can we restore the promise of democracy and lay claim to Kennedy's vision of peace.
But don't take my word for it. Read this extraordinary book and reach your own conclusions."
- Oliver Stone, http://www.huffingtonpost.com/oliver-stone/jfk-and-the-unspeakable_b_243924.html

"Now the trumpet summons us again- not as a call to bear arms, though arms we need- not as a call to battle, though embattled we are- but a call to bear the burden of a long twilight struggle year in and year out 'rejoicing in hope, patient in tribulation'- a struggle against the common enemies of man: tyranny, poverty, disease and war itself."
- John F. Kennedy

Never more true than today...
Posted by CoyotePrime at 9:38 AM