Psychology: "Humans Recognize Others By Their Eyes" 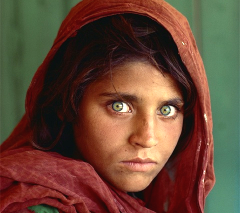 "They say the brain adapts in order to obtain the maximum amount of information possible from a face, get vital information from, firstly someone's eyes, then the shape of their mouth and, thirdly, their nose. It has been known for years that the brain mainly uses low spatial frequencies - elements that make up an image - to recognise faces.
Researcher Mathias Keil said the human brain was not interested in factors such as a person's age when it comes to identifying a face. Using a model of the brain's visual system, he analysed the faces of 868 women and 868 men to find common features. He found that the brain was able to identify a person's face from the eyes alone, but not from just the nose or mouth. This result therefore suggests that faces are themselves responsible for helping the brain to recognise features. Mr Keil said: 'The pictures of the eyes provide the least 'noisiest' result, which means that they transmit more reliable information to the brain than the pictures of the mouth and the nose. 'This suggests that the brain's facial identification mechanisms are specialised in eyes.'
He added that if someone took a photograph of a friend, then every feature of their face might be used to identify the person. However, the experiments demonstrated that the brain prefers to focus on 'low spacial frequencies' or the basic features to identify a face. It is not interested in high-frequency details such as wrinkles that reveal the person's age. The findings are published in the Public Library of Science journal "Computational Biology."
- http://www.dailymail.co.uk/sciencetech/article-1201335/The-eyes-recognising-know.html#ixzz0M7G41USI
Posted by CoyotePrime at 1:28 PM