"US Oligarchs and Their Minions" (Excerpt)

"US Oligarchs and their Minions"
by Simon Johnson
"Simon Johnson, former chief economist for the International Monetary Fund takes American oligarchs to task in “The Quiet Coup,” “Atlantic Monthly,” May 2009. Johnson believes, going forward, that we should seek smaller, better-regulated banking/finance houses incapable of doing systemic damage, and overseen by a different set of oligarchs. Maybe? Or maybe we'll find a way to regulate bigger entities effectively? Or maybe we'll just set the stage for the next big mess? Who knows? 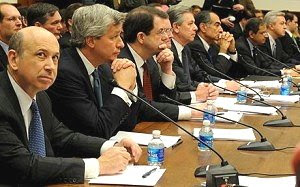 The Oligarchs of Wall Street
In any case we certainly need to find something to hope for. Burning existing oligarchs at the stake is likely out. So maybe just replacing them, rewriting regulatory rules, and starting over is the best we can hope for. Somehow I think that is where Team Obama will ultimately attempt to take us. In any case, read Simon's thought provoking, controversial article. Here is a somewhat-lengthy excerpt:
Becoming a Banana Republic: In its depth and suddenness, the U.S. economic and financial crisis is shockingly reminiscent of moments we have recently seen in emerging markets (and only in emerging markets): South Korea (1997), Malaysia (1998), Russia and Argentina (time and again). In each of those cases, global investors, afraid that the country or its financial sector wouldn't be able to pay off mountainous debt, suddenly stopped lending. And in each case, that fear became self-fulfilling, as banks that couldn't roll over their debt did, in fact, become unable to pay. This is precisely what drove Lehman Brothers into bankruptcy on September 15, causing all sources of funding to the U.S. financial sector to dry up overnight. Just as in emerging-market crises, the weakness in the banking system has quickly rippled out into the rest of the economy, causing a severe economic contraction and hardship for millions of people.
But there's a deeper and more disturbing similarity: elite business interests—financiers, in the case of the U.S.—played a central role in creating the crisis, making ever-larger gambles, with the implicit backing of the government, until the inevitable collapse. More alarming, they are now using their influence to prevent precisely the sorts of reforms that are needed, and fast, to pull the economy out of its nosedive. The government seems helpless, or unwilling, to act against them.
The crash has laid bare many unpleasant truths about the United States. One of the most alarming is that the finance industry has effectively captured our government—a state of affairs that more typically describes emerging markets, and is at the center of many emerging-market crises. If the IMF’s staff could speak freely about the U.S., it would tell us what it tells all countries in this situation: recovery will fail unless we break the financial oligarchy that is blocking essential reform. And if we are to prevent a true depression, we’re running out of time..."
- Simon Johnson
Full article here: http://www.theatlantic.com/doc/200905/imf-advice
Posted by CoyotePrime at 4:37 PM