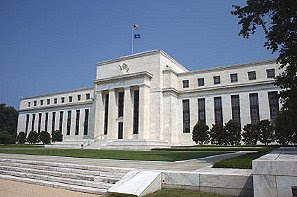 "Dismantling the Temple"
by William Greider
"The financial crisis has propelled the Federal Reserve into an excruciating political dilemma. The Fed is at the zenith of its influence, using its extraordinary powers to rescue the economy. Yet the extreme irregularity of its behavior is producing a legitimacy crisis for the central bank. The remote technocrats at the Fed who decide money and credit policy for the nation are deliberately opaque and little understood by most Americans. For the first time in generations, they are now threatened with popular rebellion.
During the past year, the Fed has flooded the streets with money--distributing trillions of dollars to banks, financial markets and commercial interests--in an attempt to revive the credit system and get the economy growing again. As a result, the awesome authority of this cloistered institution is visible to many ordinary Americans for the first time. People and politicians are shocked and confused, and also angered, by what they see. They are beginning to ask some hard questions for which Federal Reserve governors do not have satisfactory answers.
Where did the central bank get all the money it is handing out? Basically, the Fed printed it, out of thin air. That is what central banks do. Who told the Fed governors they could do this? Nobody, really--not Congress or the president. The Federal Reserve Board, alone among government agencies, does not submit its budgets to Congress for authorization and appropriation. It raises its own money, sets its own priorities.

Representative Wright Patman, the Texas populist who was a scourge of central bankers, once described the Federal Reserve as "a pretty queer duck." Congress created the Fed in 1913 with the presumption that it would be "independent" from the rest of government, aloof from regular politics and deliberately shielded from the hot breath of voters or the grasping appetites of private interests--with one powerful exception: the bankers.
The Fed was designed as a unique hybrid in which government would share its powers with the private banking industry. Bankers collaborate closely on Fed policy. Banks are the "shareholders" who ostensibly own the twelve regional Federal Reserve banks. Bankers sit on the boards of directors, proposing interest-rate changes for Fed governors in Washington to decide. Bankers also have a special advisory council that meets privately with governors to critique monetary policy and management of the economy. Sometimes, the Fed pretends to be a private organization. Other times, it admits to being part of the government.
The antiquated quality of this institution is reflected in the map of the Fed's twelve regional banks. Five of them are located in the Midwest (better known today as the industrial Rust Belt). Missouri has two Federal Reserve banks (St. Louis and Kansas City), while the entire West Coast has only one (located in San Francisco, not Los Angeles or Seattle). Virginia has one; Florida does not. Among its functions, the Federal Reserve directly regulates the largest banks, but it also looks out for their well-being--providing regular liquidity loans for those caught short and bailing out endangered banks it deems "too big to fail." Critics look askance at these peculiar arrangements and see "conspiracy." But it's not really secret. This duck was created by an act of Congress. The Fed's favoritism toward bankers is embedded in its DNA.
This awkward reality explains the dilemma facing the Fed. It cannot stand too much visibility, nor can it easily explain or justify its peculiar status. The Federal Reserve is the black hole of our democracy--the crucial contradiction that keeps the people and their representatives from having any voice in these most important public policies. That's why the central bankers have always operated in secrecy, avoiding public controversy and inevitable accusations of special deal-making. The current crisis has blown the central bank's cover. Many in Congress are alarmed, demanding greater transparency. More than 250 House members are seeking an independent audit of Fed accounts. House Speaker Nancy Pelosi observed that the Fed seems to be poaching on Congressional functions--handing out public money without the bother of public decision-making.
"Many of us were...if not surprised, taken aback, when the Fed had $80 billion to invest in AIG just out of the blue," Pelosi said. "All of a sudden, we wake up one morning and AIG was receiving $80 billion from the Fed. So of course we're saying, Where is this money coming from? 'Oh, we have it. And not only that, we have more.'" So who needs Congress? Pelosi sounded guileless, but she knows very well where the Fed gets its money. She was slyly tweaking the central bankers on their vulnerability.
Fed chair Ben Bernanke responded with the usual aloofness. An audit, he insisted, would amount to "a takeover of monetary policy by the Congress." He did not appear to recognize how arrogant that sounded. Congress created the Fed, but it must not look too deeply into the Fed's private business. The mystique intimidates many politicians. The Fed's power depends crucially upon the people not knowing exactly what it does...."
- William Greider,
Complete text of (long) article is here: http://www.thenation.com/doc/20090803/greider
This article appeared in the August 3, 2009 edition of "The Nation."

Posted by CoyotePrime at 1:38 AM