"Just Say No to Aging?"
By Wray Herbert
"A provocative new book from a Harvard psychologist suggests that changing how we think about our age and health can have dramatic physical benefits. 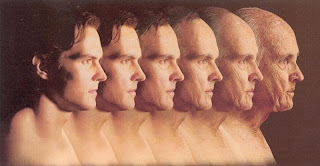 Imagine that you could rewind the clock 20 years. It's 1989. Madonna is topping the pop charts, and TV sets are tuned to "Cheers" and "Murphy Brown." Widespread Internet use is just a pipe dream, and Sugar Ray Leonard and Joe Montana are on recent covers of Sports Illustrated.
But most important, you're 20 years younger. How do you feel? Well, if you're at all like the subjects in a provocative experiment by Harvard psychologist Ellen Langer, you actually feel as if your body clock has been turned back two decades. Langer did a study like this with a group of elderly men some years ago, retrofitting an isolated old New England hotel so that every visible sign said it was 20 years earlier. The men—in their late 70s and early 80s—were told not to reminisce about the past, but to actually act as if they had traveled back in time. The idea was to see if changing the men's mindset about their own age might lead to actual changes in health and fitness.
Langer's findings were stunning: After just one week, the men in the experimental group (compared with controls of the same age) had more joint flexibility, increased dexterity and less arthritis in their hands. Their mental acuity had risen measurably, and they had improved gait and posture. Outsiders who were shown the men's photographs judged them to be significantly younger than the controls. In other words, the aging process had in some measure been reversed.
I know this sounds a bit woo-wooey, but stay with me. Langer and her Harvard colleagues have been running similarly inventive experiments for decades, and the accumulated weight of the evidence is convincing. Her theory, argued in her new book, "Counterclockwise," is that we are all victims of our own stereotypes about aging and health. We mindlessly accept negative cultural cues about disease and old age, and these cues shape our self-concepts and our behavior. If we can shake loose from the negative clichés that dominate our thinking about health, we can "mindfully" open ourselves to possibilities for more productive lives even into old age.
Consider another of Langer's mindfulness studies, this one using an ordinary optometrist's eye chart. That's the chart with the huge E on top, and descending lines of smaller and smaller letters that eventually become unreadable. Langer and her colleagues wondered: what if we reversed it? The regular chart creates the expectation that at some point you will be unable to read. Would turning the chart upside down reverse that expectation, so that people would expect the letters to become readable? That's exactly what they found. The subjects still couldn't read the tiniest letters, but when they were expecting the letters to get more legible, they were able to read smaller letters than they could have normally. Their expectation—their mindset—improved their actual vision.
That means that some people may be able to change prescriptions if they change the way they think about seeing. But other health consequences might be more important than that. Here's another study, this one using clothing as a trigger for aging stereotypes. Most people try to dress appropriately for their age, so clothing in effect becomes a cue for ingrained attitudes about age. But what if this cue disappeared? Langer decided to study people who routinely wear uniforms as part of their work life, and compare them with people who dress in street clothes. She found that people who wear uniforms missed fewer days owing to illness or injury, had fewer doctors' visits and hospitalizations, and had fewer chronic diseases—even though they all had the same socioeconomic status. That's because they were not constantly reminded of their own aging by their fashion choices. The health differences were even more exaggerated when Langer looked at affluent people: presumably the means to buy even more clothes provides a steady stream of new aging cues, which wealthy people internalize as unhealthy attitudes and expectations.
Langer is not advocating that we all don uniforms. Her point is that we are surrounded every day by subtle signals that aging is an undesirable period of decline. These signals make it difficult to age gracefully. Similar signals also lock all of us—regardless of age—into pigeonholes for disease. We are too quick to accept diagnostic categories like cancer and depression, and let them define us. Doing so preempts the possibility of a healthful future.
That's not to say that we won't encounter illness, bad moods or a stiff back—or that dressing like a teenager will eliminate those things. But with a little mindfulness, we can try to embrace uncertainty and understand that the way we feel today may or may not connect to the way we will feel tomorrow. Who knows, if we're open to the idea that things can improve, we just might wake up feeling 20 years younger."
- Wray Herbert writes the blog "We're Only Human" at www.psychologicalscience.org/onlyhuman.
- http://www.newsweek.com/id/193197?digg=1
Posted by CoyotePrime at 7:27 AM