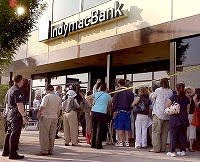 "Days Away From Economic Chaos?"
By Bill Sardi
"America is just a few days away from a possible day of reckoning. I again call attention to this day, August 25, when the Federal Deposit Insurance Corporation issues its 2nd Quarter report for 2009 on the state of health of American banks. It has not particularly alarmed Americans that its growth and prosperity have been built upon debt. The American public is a bit desensitized, particularly since the Y2K threat fizzled. We must wait and see how Americans respond to the upcoming FDIC report.
There are roughly 8400 American banks that set aside a small portion of their profits to aggregately insure bank depositors should their local bank fail. A plethora of bank failures has depleted the FDIC reserve fund from $52.8 billion in 2008 to $13 billion in the 1st Quarter of 2009.
Alison Vekshin, writing for Bloomberg, indicates, "The failure of 77 banks this year is draining the fund, prompting the agency in May to set an emergency fee of 5 cents for every $100 of assets, excluding Tier 1 capital, to raise $5.6 billion in the second quarter. The agency has authority to set fees in the third and fourth quarters, if needed, to prevent a decline in the fund from undermining public confidence."
Vekshin goes on to report that 56 bank failures since March 31 have cost the FDIC an estimated $16 billion. (For comparison, in the 1st Quarter, bank failures only cost the FDIC $2.2 billion.) That $16 billion bank rescue would fully deplete the FDIC fund as it only had $13 billion at the close of the 1stQuarter. It’s possible the FDIC has already tapped into its line of credit at the Treasury Department without setting off alarm bells to the public.
The FDIC is required by law to maintain a reserve ratio, or balance divided by insured deposits, of 1.15 percent. It was at 0.27 percent as of March 31. It could be near zero at the current moment. The FDIC's 8400 banks will likely be assessed special fees to shore up the FDIC's treasure chest. Insured institutions set aside $60.9 billion in loan loss provisions in the 1stQ, an increase of $23.7 billion (63.6 percent) from the first quarter of 2008.
Banks have been slow to foreclose, allowing mortgage holders a few months before their home is deemed in default and giving another 2 years before the property is foreclosed on its accounting books. This practice has been able to temporarily hide most of the banking collapse. But banks must eventually write down their real estate home mortgage losses. First-quarter net charge-offs of $37.8 billion were slightly lower than the $38.5 billion the industry charged-off in the fourth quarter of 2008.
As banks write off bad home loans, this downsizes their asset values. Downsizing at a few large banks caused $302-billion decline in industry assets in the 1stQ. The FDIC report says: "Total assets declined by $301.7 billion (2.2 percent) during the quarter, as a few large banks reduced their loan portfolios and trading accounts. This is the largest percentage decline in industry assets in a single quarter in the 25 years for which quarterly data are available."

The FDIC, which claimed only about 300 problem banks in the 1st Quarter of 2009, but hid the fact there were about 2000 total lame banks among its 8400 members, This has given rise to the term "zombie banks," which are defined as "a financial institution with an economic net worth that is less than zero, but which continues to operate because its ability to repay its debts is shored up by implicit or explicit government credit support."
So just how much liability does the FDIC bear aggregately for its "problem banks?" At the end of the 1st Quarter in 2009 the FDIC said that figure was $220 billion. Remember now, the FDIC had only about $13 billion to over these institutions at the time. This figure will likely grow beyond imagination with the issuance of the FDIC 2ndQ report.
So the FDIC 1st Quarter report tells all – our so-called conservative American bankers, entrusted with your hard-earned savings, with no place to turn to generate traditional profits, have entered the gambling parlor. Here is how the FDIC said it: "Sharply higher trading revenues at large banks helped FDIC-insured institutions post an aggregate net profit of $7.6 billion in the first quarter of 2009."
Trading revenues means profit generated from trading stocks and other risky investments. Recall, when your money was being financed commercial and residential property it had some collateral behind it. An asset (real estate) was held in balance against the risk of failure to pay the loan. Now bankers are "investing" your money in the stock market in what appears to be a replay of how the Japanese propped up their stock market in recent years – by simply having major companies purchase each other’s shares to prop up value.
The FDIC's 1stQ report says: "Total equity capital of insured institutions increased by $82.1 billion in the first quarter, the largest quarterly increase since the third quarter of 2004 (when more than half of the increase in equity consisted of goodwill)." What the hoot is "goodwill" you want to know? It is how the banks are cooking their books. Arbitrary value is being given to bank holdings.
The FDIC 1stQ report goes on to say that: "Most of the aggregate increase in capital was concentrated among a relatively small number of institutions, including some institutions participating in the U.S. Treasury Department’s Troubled Asset Relief Program (TARP)."
So there, you can see that in addition to goodwill, the bank's capital was largely increased by bailout funds. So a dose of reality therapy will lead one to conclude that nearly all American banks are essentially insolvent.
If this leaves you feeling a bit queasy, well, you may need to reach for Dramamine when you realize the FDIC is not only broke, but it will probably announce it is tapping into its line of credit at the US Treasury Department, which is also insolvent (America is spending $1.58 trillion more than it collects in taxes this year).
Here is how Bloomberg’s Vekshin says it: "If the fund is drained, the FDIC also has the option of tapping a line of credit at the Treasury Department that Congress extended in May to $100 billion, with temporary borrowing authority of $500 billion through 2010."
Now if just a small portion of American bank depositors hear that the FDIC had to tap into the US Treasury for funds, and these depositors feel their banked money is at risk and want to withdraw some of it, the mother of all bank runs could ensue. This could create the day of reckoning that many have predicted. A short banking holiday would have to be declared and who knows what happens from there – troops in the streets, issuance of new currency, martial law? Don’t think those in the Federal government haven’t made plans for such an occurrence.
Of surprising interest, the FDIC reveals that millions of Americans don’t trust or don’t use banks. These Americans have been called the unbanked or underbanked, meaning that they "do not have access to banks or are not fully participating in the mainstream financial system," says the FDIC. The FDIC guesstimates that 10 percent of American families are "unbanked." That’s a lot of capital the banks don’t have access to. Those who hold currency outside of banks are anathema to the gods of banking."
- Bill Sardi, http://www.lewrockwell.com/sardi/sardi116.html
Posted by CoyotePrime at 2:07 PM