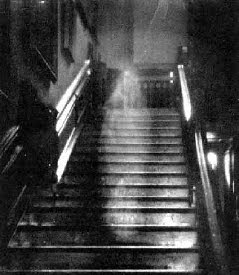 "Soul"
by Chet Raymo
"There is a moment early in Stefan Zweig's The Post Office Girl when the eponymous heroine has a moment of illumination: "In this instant, shaken to her very depths, this ecstatic human being has a first inkling that the soul is made of stuff so mysteriously elastic that a single event can make it big enough to contain the infinite."
Two interesting thoughts here.

First, that the soul is elastic. This is a rather different notion of the human soul than the one I was raised with. We were taught that the soul - the essential self - is created fully formed at the first moment of conception and lives on forever after the death of the body. And why not? The soul (I was taught) is a thing different from the body, independent of matter, an "angelic sprite" that lifted human beings above the status of the mere animals. Mind you, we never thought any of this through to its manifestly absurd conclusion, but it served at the time to hold up a rickety bric-a-brac of theology.
"Soul" is still a good word for the essential self, but in the new dispensation it is a rather more fleshy thing of many complex parts: an inherited genome (unique except for identical twins), a soma, an immune system that can tell self from non-self, a lifetime's worth of experiences stored with varying degrees of permanence in the brain, an environment. The soul as revealed by science is indeed elastic. It grows and contracts. It bends and flows. It encompasses and excludes. It is not the same from one moment to the next, and yet it remains. In a sense it even remains after the dissolution of the body, in that the flow of the world has been in some small way redirected by our being here. Oh yes, elastic. And sometimes, as Zweig suggests, it swells with an unexpected urgency, as when we encounter a particularly moving work of art, or suddenly comprehend a truth that had previously been hidden.
Second thought: The soul can contain the infinite. The human brain is certainly the most complex thing that we know of in the universe. But it is not infinite. And yet we have a concept of the infinite. We can even give the concept a precise mathematical expression. And conceiving of the infinite we can strive to attain it. Thus Darwin and Einstein. Thus Mozart and Matisse. Thus Meister Eckhart and Julian of Norwich. Thus in his infinitely inferior way your host, in the tail-end of life reading Stefan Zweig. Why? Not because I will carry it with me into infinity, but because having glimpsed the idea of the infinite I feel the uniquely human need to test and measure the soul's elasticity."
- Chet Raymo, http://www.sciencemusings.com/blog/
Posted by CoyotePrime at 3:56 PM