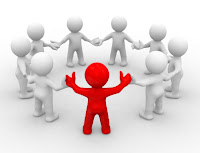 "Employers Using Social Networks to Screen Job Applicants"
- Jenna Wortham
"Most job applicants have a general checklist before a job interview — updating a résumé, ironing a professional outfit, rehearsing an explanation for those two years spent bumming around after college. However, if tidying up the Facebook profile isn’t on that list, maybe it should be.

According to a new study conducted by Harris Interactive for CareerBuilder.com, 45 percent of employers questioned are using social networks to screen job candidates — more than double from a year earlier, when a similar survey found that just 22 percent of supervisors were researching potential hires on social networking sites like Facebook, MySpace, Twitter and LinkedIn.
The study, which questioned 2,667 managers and human resource workers, found that 35 percent of employers decided not to offer a job to a candidate based on the content uncovered on a social networking site. (The survey has no margin of sampling error because it was not drawn from a representative nationwide sample but rather from volunteer participants.)

The report showed that Facebook was the most popular online destination for employers to do their online sleuthing, followed by LinkedIn and MySpace. In addition, 7 percent followed job candidates on Twitter.
More than half of the employers who participated in the survey said that provocative photos were the biggest factor contributing to a decision not to hire a potential employee, while 44 percent of employers pinpointed references to drinking and drug use as red flags. Other warning signs included bad-mouthing of previous employers and colleagues and poor online communication skills.
While most of these may seem like obvious stumbling blocks, what constitutes alarming behavior to a particular employer? Would photographs of a trip to the beach be considered inappropriate? What about a racy Halloween costume? As Facebook continues to grow as an essential personal and business networking tool for most of the Web, these issues are only going to get thornier. To be on the safe side, it’s probably wise to use the new privacy settings offered by Facebook to keep everything but the most innocuous content away from the public eye."
- Jenna Wortham,
http://bits.blogs.nytimes.com/2009/08/20/more-employers-
use-social-networks-to-check-out-applicants/
Posted by CoyotePrime at 7:55 AM